Areas most affected by Mesothelioma

New figures show that in England and Wales, 6 people die of mesothelioma cancer every day.

Barrow-in-Furness asbestos death rates now the highest in the country, with the death rate now sitting at three and a half times the national average. Barrow now has a rate of 11.57 deaths per 100,000 people compared to an average for England and Wales of 4.4.

It means a total of 49 people have died as a direct result of mesothelioma in the town between 2010 and 2014 - the most recent period for which statistics are available.

Bob Pointer, of the Barrow Asbestos-related Disease Support Group, said the number of cases occurring in the town continues to rise. He said:

" You hear that the numbers of people affected is no longer going up but that's not what we are seeing . . . The past 10 years since the group was set up have been interesting. It's been one step forward and half a dozen back. But we are still here for people as they are diagnosed and that is still happening here all the time. "

A regional breakdown highlights the towns hardest hit by the deadly disease. 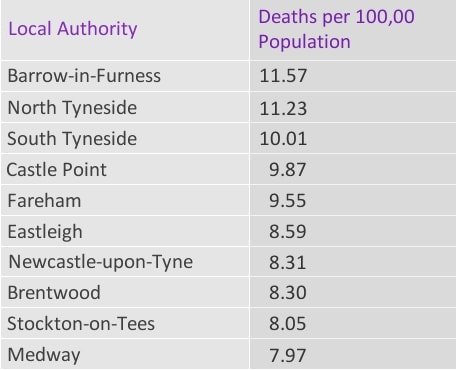 Dr Helen Clayson, chairwoman of Cumbria Asbestos-Related Disease Support and former medical director at St Mary's Hospice, Ulverston, said it could be construed as good news in one respect, as Barrow was once "six or seven times" above the national average. But ultimately it shows the problem is persisting - and affecting people in different professions.

“ The suffering of families affected by mesothelioma demonstrates how important it is that lessons are learned and health and safety in the workplace is respected . . . As the effects of more robust regulation of the use of asbestos and better safety practices come to fruition, the number of needless deaths should start to decline . . .

Construction workers and associated tradesmen are a high-risk group for asbestos exposure,as are shipbuilders. Even teachers are at risk as asbestos was used so widely when building schools. 19 teachers are dying from mesothelioma each year . . .

It is a national tragedy. ”