We have settled many asbestos related claims against British Leyland, including mesothelioma claims. 2 recent cases are detailed below . . . 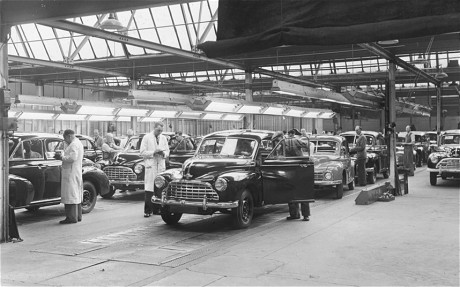 In 1952 Morris merged with Austin to form the British Motor Corporation (BMC), and in 1967 BMC became British Motor Holdings after merging with Jaguar.

The following year the company merged with the Leyland truck company, including Triumph and Rover, to become the British Leyland Motor Corporation.

Asbestos use at Leyland

Asbestos was used in the manufacture of brake pads and linings, gaskets and clutch facings and for many years.
The use of asbestos in these components was prohibited from 1999, with the exception that pre 1973 vehicles could continue to be fitted with asbestos containing brake shoes until 2004.

He was exposed to significant levels of airborne asbestos dust as maintenance work was always being done in the factory, especially during the summer shutdown.

Mr R had a brief spell in The Royal Navy before working as an apprentice painter and decorator. He then worked refurbishing Co-Op stores, but spent most of his working life by Morris/British Leyland and then Unipart at Cowley. He recalled being in contact with asbestos while in The Navy as the old ships were riddled with asbestos and also as a painter. However the firm was a small family run business that had long since ceased to trade.

Shortly after being diagnosed with Mesothelioma, the family of Mr R contacted our lead asbestos solicitor Helen Childs, who decided to concentrate on securing compensation from his time at Morris/BL in Cowley. She sent a letter to the successors of Morris/British Leyland and applied for the Veterans Agency scheme for ex services personnel for his time in The Navy.

The Veterans Agency pays a lump sum of £140,000 following a mesothelioma diagnosis instead of a weekly pension. It was calculated that the amount from the Veterans Agency would be more than the likely amount if a civil claim against the insurers of British Leyland was pursued. It would also arrive in 6 weeks which was an important consideration for the family because at that stage Mr R, then aged 93, was very poorly. The family was then secure in the knowledge that the claim was successful. This provided funds for additional treatment, care and expenses, with plenty left to indulge his daughters and grandchildren.

This case demonstrates the value of expert legal advice. Most solicitors under these circumstances would have pursued a civil claim against the insurers of British Leyland. However, in this case the more valuable claim was via the Veterans Agency, so Helen advised accordingly even though it meant that our solicitors would not be receive any payment. Normally, when claiming for mesothelioma, solicitors are paid from the insurers of the defendants.

Case 2: Out of time mesothelioma claim settles for 6 figure sum

Mr G worked at Morris Motors (British Leyland) for his whole working life. After he retired he was the main carer for his wife who had health problems of her own. He also used to maintain the household and do the gardening.

He became unwell in 2011 and went to his GP who referred him to the local hospital for further investigations. They found he had fluid on his lungs which they decided to drain and at the same time take samples so they could try and diagnose what was causing the pain, shortness of breath and fluid build up. The samples were inconclusive and it was felt that a thoracoscopy was necessary. Sadly he died as a result of complications following the thoracoscopy. It was found that he had been suffering from mesothelioma.

The normal time limit for bringing a claim for mesothelioma compensation is 3 years from the date of death. This time limit had already passed by the time the family consulted our lead solicitor, Helen Childs in 2015. Using her knowledge of the working practices at British Leyland and witness statements obtained from other clients, Helen was able to persuade Morris Motors’ insurers to extend the time limit for bringing a claim by a further year and to settle the claim well within that time. This was even though there was a delay in obtaining the medical notes and records which had long since been archived by the Health Authority.

Any individual or family affected by mesothelioma is urged to seek advice even if the normal time limit for bringing a claim has expired. Occasionaly, it is possible to extend this time limit and it is difficult for defendants to establish that they find it any more difficult to investigate a mesothelioma claim within a short period of expiry of the time limit than they would have done if it had been brought a few months or even years earlier.

This is because they are being asked to investigate the circumstances of exposure to asbestos which occurred many decades before and the argument is that the expiry of the time limit and passing of a few more months does not cause the defendants any additional prejudice in investigating historic working practices in any event.

Mr J of Cowley in Oxford was employed by Morris Motors/British Leyland for 23 years from the late 50s to early 1980s. He worked on the assembly line for much of this time and also used to carry out stocktakes during Morris’s annual shutdown in the summer.

In 2014 when he was aged 76 he became short of breath and was found to have fluid on his lungs. He underwent tests which sadly revealed he had mesothelioma which is an aggressive asbestos related cancer.

He instructed our specialist solicitors in July 2014 and by October BMW the successors to Morris/British Leyland had admitted liability and made a payment on account of £50,000. Court proceedings were issued to force the insurers of BMW to make an offer and Mr J’s claim was settled for a substantial 6 figure sum in May 2015.

After the settlement Mr J wrote “the solicitors were extremely professional but also sympathetic. The case was successfully concluded through the hard work of my solicitor and her team”.

If you worked at Leyland from the 1950s to the 1970s, you were probably exposed to asbestos. If you would like some advice on whether you can claim compensation, please contact on the number provided below.