Asbestos was used extensively in shipbuilding, so many dockyard workers around the country from the 1940s until the late 1970s were exposed to asbestos fibres on a daily basis. A couple of recent examples are listed below of this exposure leading to a diagnosis of mesothelioma many years later.

Mr D was just 15 when he was employed by Chatham Dockyards as an apprentice boiler maker in 1955. Initially, as with many young apprentices, he was given the dogs body work of sweeping and cleaning up after the more experienced workmen. This took place mostly on the ships which contained huge quantities of asbestos in those days.

It was used to lag and insulate pipes and boilers as well as for asbestos rope, so when ships were repaired, there was airborne asbestos and lumps of asbestos lying around. The workers would roll this to throw at each other or kick about as footballs.

In common with most workers from the 1950s to the 1970s the dangers of asbestos were not known so no warnings were issued about inhaling asbestos fibres. Mr D was formally diagnosed with pleural mesothelioma in 2016 after a series of tests and scans. He had a course of chemotherapy that year but his health deteriorated rapidly and sadly he died in July.

His widow was in shock for some time, so it was a few years later that she contacted our team of mesothelioma lawyers for advice on whether it was still possible to claim, given the amount of time that had elapsed. We immediately sent a letter of Claim to the MoD, who hold the liabilities for Chatham Dockyard. Our lawyers then sought witness statements to back up the claim with evidence of the terrible conditions at the Dockyards at that time. His widow also provided a detailed statement about the conditions and the dust on his clothing when he returned from work. Court proceedings were issued in November 2019 and negotiations were entered into with the MoD.
The claim settled in early 2020 for a sum in excess of £100,000. 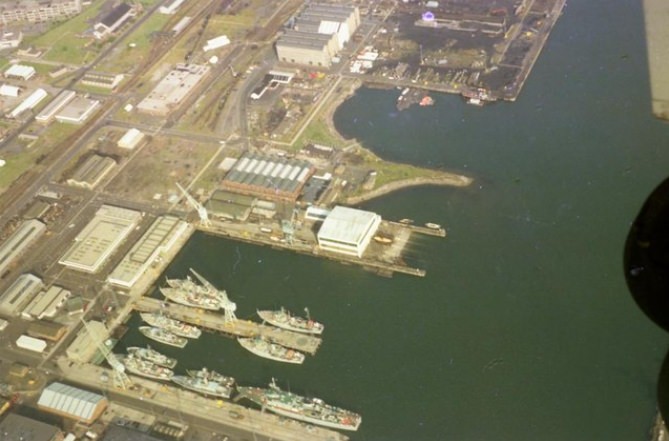 Mr B found out in 2019 that he had mesothelioma and made contact with our specialist asbestos claims team shortly afterwards. Our lawyers will always travel to meet victims of mesothelioma whenever possible and Jennifer Seavor met with Mr B a his home in Blackpool.

He recalled working at Rosyth Dockyard as a painter and decorator from the mid 50s until mid 70s. Rosyth Dockyard is a large naval dockyard on the Firth of Forth at Rosyth, Fife, Scotland which used refit Royal Navy ships and submarines. Before its privatisation in the 1990s it was formerly the Royal Naval Dockyard Rosyth.

As a painter and decorator Mr B would sand down pipes before repainting. The pipes were often in a poor state of repair and the asbestos that lined the pipes would be disturbed with deadly fibres becoming airborne. He was often working alongside laggers who mixed the raw asbestos into a paste in large drums - very dusty work. Our lawyers managed to trace a few of his fellow workers to back up his claims.

Similar to the Chatham claim, the MoD is now liable for such claims as well as The Ministry of Housing, Communities and Local Government. However, they refused to admit liability so court proceedings were issued in an attempt to break the deadlock. There was now a sense of urgency as his health suddenly significantly worsened. Sadly, he passed away just before the court date, but the claim remained in place while a Grant of Probate was obtained by the Executor of his estate. Once issued, the proceedings were re-started and a new hearing was listed in March 2020.

Shortly before the court case was due to commence, the defendants admitted liability and the claim was been successful. The value of the case was assessed and negotiations then took place.

" I would like to thank most sincerely Jennifer Seavor and the team at RWK for settling my Step Grandad's Mesothelioma claim. It was a pleasure to have Jennifer act on behalf of myself and my family. She showed true dedication, empathy and sincerity. Jennifer and the team worked above and beyond to successfully conclude our claim. I highly recommend Royds Withy King. "

If you were a dockyard worker who was exposed to asbestos fibres at work and now have an asbestos illness as a result of that exposure, we can help you to claim compensation. Simply call our free-phone number below and ask for Warren Miller or Kathy Cooke.