Lung Cancer is most commonly associated with smoking cigarettes, however, it can be caused by inhaling asbestos dust.

People exposed to asbestos inhale hundreds and thousands of asbestos fibres, which may cause asbestos lung cancer.

For details on how to claim for mesothelioma, an asbestos cancer that affects the lining of the lungs: Click here >

What are the Symptoms of Asbestos induced lung cancer? 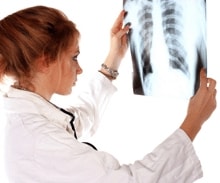 Most instances of Asbestos Lung Cancer starts in the lining of the bronchi, the tubes into which the trachea or windpipe divides.

However, this type of cancer can also begin in other areas such as the trachea, bronchioles, or alveoli. Asbestos lung cancer usually develops slowly, once it occurs, cancer cells can break away and spread to other parts of the body.

People working in industries such as plumbing, demolition work and at power stations, are likely to have been exposed to breathing in fibres of asbestos often over a period of years.

Asbestos related lung cancer can take several years or more to develop, so ill effects are not instantly traceable to asbestos.

Some of the symptoms of asbestos induced lung cancer are . . .

Can you claim for Asbestos lung cancer?

If you have been diagnosed with asbestos induced lung cancer in the last 3 years you will be able to make a claim.

Doctors will accept that lung cancer has been caused by asbestos exposure if it can be shown that the person suffering from lung cancer already has asbestosis or has been exposed to enough asbestos dust to cause Asbestosis.

The success of the claim will depend on whether the company where the exposure occurred is still in existence.
If you are not sure, don't worry; it could be that the company was taken over, or that the insurers of the company still exist. In either case we will find out on your behalf as part of the service.

If you have any questions, please contact us via the telephone number below, or use our live chat facility. We are normally available all day, every day, but if you don't receive an answer on the live chat, leave a message on the call-back form and we will get back to you.