Mrs P worked as a clerk at The Bank of England on Castle Street, Liverpool between 1957 and 1964. The building was built between 1845 and 1848 and was constructed as one of three branch banks for The Bank of England in the mid-19th century. Like the vast majority of bank employees, she never worked with asbestos, however she was diagnosed with Mesothelioma a couple of years ago. 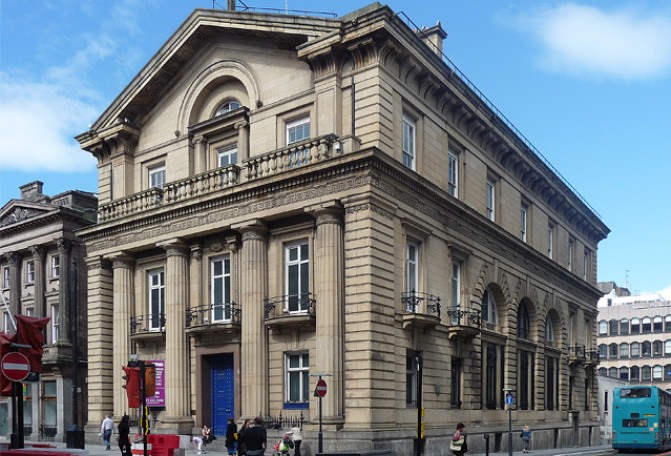 The only time she thought she may have been exposed to asbestos dust was at the bank when it was renovated and refurbished.

The renovations centred around the basements where the bank vaults were situated and included the removal of old walls, ceilings and pipework.

Like many buildings at the time, pipes were lined with asbestos and it was likely that it was used in other areas too.

The bank managers were worried that workers would steal from the vaults, so bank workers including clerks were sent down to the basements to kept watch. They were provided with masks as it was very dusty, but they were flimsy and the workers breathed in the dusty air on a regular basis. As old walls were demolished and pipes ripped out, Mrs P recalled days when she would be covered with dust from head to toe. They were also paid extra for laundry, so the dusty clothing would be taken home to be washed or taken to dry cleaners. Either way, more dust would be inhaled.

Shortly after the diagnosis of mesothelioma, she contacted our solicitors with a view to claiming compensation. They travelled to her home to discuss how she thought she may have been in contact with asbestos dust. The time in the bank basements was the only time in her life that she thought asbestos exposure was possible, making the assumption that the dust she breathed contained asbestos dust.

Witness statements taken to back up claim

Our solicitors asked if she was still in touch with any of her fellow employees and she provided a list of potential contacts. However, as this was more than 50 years ago, it seemed unlikely that they would recalled whether asbestos was present in the dust either. Witness statements were taken that confirmed the statement of Mrs P about the amount of dust, the poor quality of masks and laundering of clothing.

Our solicitors hoped that statements would be sufficient to initiate a claim and duly sent in a letter of claim to The Bank of England. However, the bank rejected the claim for compensation on the basis of insufficient evidence that asbestos had been present or removed from the building at that time. Our solicitors widened their search for witnesses by placing ads in local papers and investigating the history of the bank at the Castle Street premises.

Some of the relevant documents were located at The Bank of England’s archives in London and many hours of investigation followed, trying to find records to prove the case. Relevant documentation was finally sourced, describing not only the dusty conditions, but also the names of the companies that were used and some of the names of their employees.

This led to another wider appeal for witnesses. They found someone who had worked at the bank as apprentice plumber who recalled that the pipes in the basement were lagged with asbestos and were in a fragile state. When removed, they simple crumbled, releasing dust and asbestos fibres into the atmosphere, to be breathed in by everyone who happened to be there.

In-spite of this new evidence, The bank still refused to admit that they were at fault and court proceedings were issued by our team shortly afterwards. More evidence was obtained, this time from expert engineers, to substantiate the claim and this time the bank and their insurers agreed to settle for a substantial amount.

Unfortunately, Mrs P died shortly after this, but her husband continued the with the claim as it was important to prove where the exposure to asbestos occurred that led to her premature death from mesothelioma.

After the case Mr P commented:

" My wife died because she, in her youth, was exposed to asbestos where she worked. Royds Withy King worked for over 3 years to produce evidence of her employer's responsibility. They succeeded in obtaining a substantial compensation. I am very impressed by the effort which was put into the necessary research. "

This case demonstrates the extent to which our dedicated team of mesothelioma solicitors will pursue a claim to get justice for victims of this cancer. If you have any questions about whether you or a family member may claim for mesothelioma or other asbestos diseases please contact us on the number below and ask for Kathy Cooke or Warren Miller