Can Mesothelioma Survival Rates be improved by Chamomile Tea?

Chamomile, meaning ground apple, has been enjoyed for centuries in the Roman Empire, during Egyptian rule, and in ancient Greece. It is known for its special flavanoids, chrysin, chamomile and offers numerous health-boosting benefits. 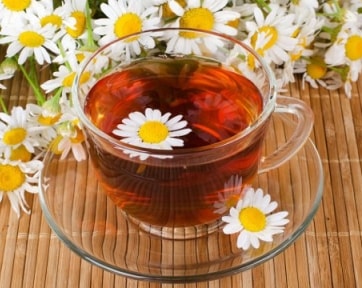 Scientists in Italy have found that a flavonoid found in chamomile tea, parsley and celery may help to improve the odds of surviving mesothelioma. Test were performed on mice that had mesothelioma cells injected with the compound Apigenin.

Apigenin is a natural product found in many plants belonging to the flavone class. It has been the focus of a number of laboratory experiments and animal studies and is known to induce autophagy, a kind of cellular waste-recycling system in leukemia cells, which may support a possible chemopreventive role.

Induced autophagy interfers with the action of the chemotherapy drug vincristine.

The Scientists from the University of Rome first applied apigenin to both human and mouse mesothelioma cells in the lab
to measure their impact on various cellular functions.

According to the report, Apigenin was found to inhibit vitro mesothelioma cell survival, increase reactive oxygen species intracellular production and induce DNA damage. It also appeared to accelerate the process of natural cell death (apoptosis), and induced a range of chemical reactions among the treated mesothelioma cells.

Mice with Mesothelioma Respond to Treatment

The second phase of the experiments was to measure apigenin’s impact on mesothelioma tumors in the live mice.
The mice had been implanted with human mesothelioma cells and had started to accumulate abnormal amounts of fluid in their abdomens.

However, when the researchers injected Apigenin into their abdomins, they began to improve and there was a reduced risk of tumour growth. Apigenin is one of several plant compounds that have been studied for their potential in new mesothelioma treatments. Some others include curcumin found in the spice turmeric, the polyphenol resveratrol in red wine and sulforaphane in cruciferous vegetables.