Our solicitors have brought many claims against British Rail and it's subsidiary companies over the years. The following was a claim against Swindon Railway Works.

The Railway Works at Swindon have a reputation for asbestos use, even though the works closed in 1986. The old locomotive boilers were covered in asbestos and workmen were expected to strip them with no protection against the asbestos dust. 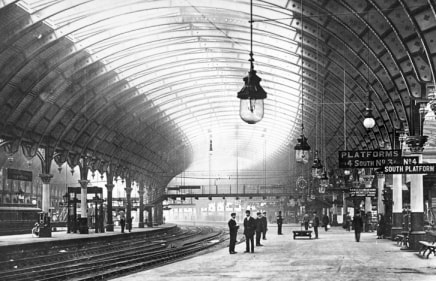 Our lead solicitor recently settled a claim for mesothelioma following the death of Mr K in 2013.

Mr K was an apprentice at Swindon Railway Works in the early 1960s when asbestos use was still widespread and was exposed to the dust on a regular basis.

He then went on to work for plumbing and pipe fitting firms including Drake and Scull and Young Austen Young, building the Wyvern Theatre and the Princess Margaret Hospital in Swindon.

Mr K was diagnosed with mesothelioma in 2011 when he was 72. Years before he had developed pleural plaques - small areas of calcification and asbestos related scarring in the lungs. At that time he instructed a local Swindon firm of solicitors who had settled his claim for pleural plaques in full against the Swindon Railway Works. However, they failed to obtain his employment history or take a full statement from him.

They settled his claim on a “full and final settlement” basis. This meant that if he went on to develop an other asbestos related disease, he wouldn’t be able to pursue the Swindon Railway Works for further compensation. This was despite the fact that he was running a relatively high 11% risk of developing mesothelioma and in the absence of any explanation of the potential value of a claim for mesothelioma.

When Mr K developed mesothelioma he went back to his original firm of solicitors for advice. They told him there was nothing further that could be done. In the meantime there had been several articles in the legal press suggesting that a second claim might be possible, and the reported cases of Dowdall and our own claim of Lloyd v Humphries and Glasgow were making their way through the courts. Both cases confirmed that it was possible to pursue previously unsued defendants for damages for mesothelioma following a previous full and final settlement against other defendants.

Unfortunately, Mr K died in June 2013. Mrs K then approached our specialist solicitors. We agreed to take on the case against Drake and Scull and Young Austen and Young and to pursue them for damages for mesothelioma, notwithstanding the previous full and final settlement for pleural plaques.

Witness evidence was obtained from other employees of Young Austen and Young and Drake and Scull. They confirmed that the widespread use of asbestos at both companies. The Wyvern Theatre and Princess Margaret Hospital also contained significant amounts of asbestos and it was impossible to avoid exposure to the airborne dust when they were working there during the construction process.

On that basis our lead solicitor was able to negotiate a six figure mesothelioma settlement for Mrs K including the repayment of benefits to the government.

After the claim concluded she said:

" That is fantastic, you are brilliant!
Thank you so much for all of the work you have done to achieve this amazing result. "

In you have been diagnosed with Mesothelioma after already receiving compensation for another asbestos related condition, you may still be eligible for further compensation. If you have any questions, we are here to help - even if you have been informed that you cannot claim.
Please call our Mesothelioma Helpline on the number below and ask for Kathy Cooke or Warren Miller.