When a patient has a history of smoking and asbestos exposure, it is often difficult - both medically and legally - to determine the primary cause of the cancer.

Smoking contributes to the development and severity of asbestos related diseases in 3 ways:

Smoking affects the lungs' ability to self-clean. The lungs contain cilia - minute hair-like projections that move debris up and out of the airways. Smoking can damage the cilia which hampers their ability to expel particles, including asbestos fibres.

Smoking can cause scarring and inflammation to the lungs. Smoking can change how the immune system reacts to asbestos fibres, this can cause the lungs to develop more scar tissue than they would otherwise. This may also lead to asbestosis.

Smoking affects the lungs' ability to absorb oxygen. Alveoli are tiny air sacs in the lungs that take up oxygen when you breathe in and transfer it into the bloodstream. Smoking can destroy many of these sacs, which makes it more difficult to breathe.

Smokers who are also exposed to asbestos have a risk of developing lung cancer that is greater than the individual risks from asbestos and smoking added together. 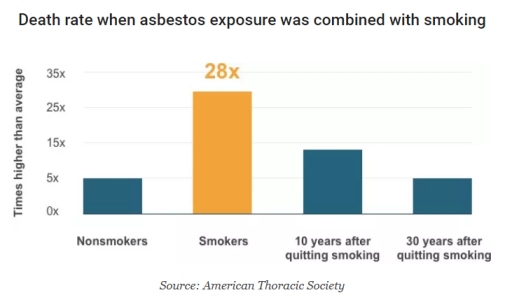 A study of more than 50,000 medical records revealed that occupational asbestos exposure on its own was associated with a lung cancer death rate five times higher than average.

However, when smoking was combined with asbestos exposure, the death rate was 28 times higher than average.

Mr H worked as a fabricator and plater for around 20 years from the mid 1960s. His work included fabricating and lagging industrial boilers. Asbestos was used in the insulation process as it is resistant to heat and chemical reactions. It is also non-corrosive, does not conduct electricity and was affordable and versatile and Mr H had a significant level of exposure to the asbestos fibres. He also worked alongside pipe laggers who would mix the dust in the vicinity without any thought of health and safety as the dangers of asbestos were not then known.

Mr H was in his mid 70s when he diagnosed with lung cancer in both lungs in 2017. He had surgery and a course of radiotherapy which was successful and the cancer was in remission. Prior to this he had been the primary carer for his wife, who had a leg amputated a few years ago. Following the cancer diagnosis, it was clear that he would be unable to care for her in the same way. He instructed our asbestos solicitors who focused their efforts on the issue of this care.

Our solicitors employed the services of an asbestos engineer who provided proof that Mr H was exposed to large amounts of asbestos and they invited the defendants to settle the case on that basis. In the spring of 2020, they agreed to settle the case, and made an interim payment of £40,000.

Did smoking affect the amount of asbestos compensation?

In asbestos related lung cancer claims, any history of smoking can be taken into account when figuring out how much compensation should be paid to the claimant. In this case, our solicitors negotiated a much larger amount of compensation than the defendants had proposed and the case was settled in June 2020 for over £110K. This amount took into consideration Mr H’s reduced capacity to care for his wife.

Our solicitors always strive to reach a settlement without issuing court proceedings to ensure that the case is settled quickly. This guarantees financial security for the future and in this case allowed Mr H to provide additional care needed for his wife.

If you would like advice on claiming for asbestos cancer and other asbestos diseases, please call us on the number below and ask for Warren or Kathy. You can also chat online or send a call-back request