According to a Government survery conducted in 2008, it is estimated that about 70% of school buildings contain asbestos, either in the walls, pipes or ceilings. Since 1980, more than 200 teachers have died of mesothelioma with around 140 teachers dying in the last decade. Mesothelioma has also taken the lives of caretakers, secretaries, cooks, cleaners and nursery nurses.

The following is an example of the many claims our solicitors have made on behalf of school teachers and other staff employed by schools.

Mr S was 82 at the onset of the symptoms of Mesothelioma. 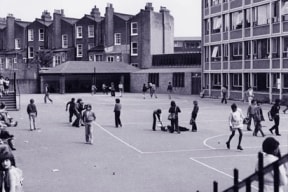 One school he worked at had an asbestos corrugated roof and Mr S was often present when various maintenance and repair works were carried out on the schools. He often had to clean and sweep up after the work was completed. When Mr S worked at Brampton Manor in the 1970s, the school was extended and he recalls that asbestos may have been used. Again, he had to clean up after the workmen and may well have breathed in asbestos dust.

Mr S decided that he wanted to settle the mesothelioma claim on a lost years basis so that he knew his family would be financially secure, even though the claim may have been worth more on a dependency basis. Terms of settlement were agreed during the claimant's lifetime, unfortunately, the compensation was not received until after his death.

Have you been diagnosed with mesothelioma after asbestos exposure at a school?

If you have been exposed to asbestos while teaching or working at a school in the UK and have recently developed mesothelioma, we will be able to help you to claim compensation. Our mesothelioma solicitors have dealt with hundreds of similar cases and have recovered millions in compensation. Contact us on FreePhone 0800 923 0046 and ask for Kathy Cooke or Warren Miller.