The Matthew Hall Group was formed in 1848 and was acquired by AMEC in 1987. SPIE acquired AMEC in 2007 and Matthew Hall has been relaunched as SPIE Matthew Hall. They have been involved in high profile projects such as Tag McLaren and BAA Terminal 5.

The following case against Matthew Hall is typical of many cases we have taken over the years against Heating Systems companies. Mr A was diagnosed with asbestosis in 2007 and received payment of £55,000 in 2008. 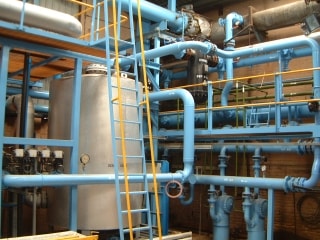 Much of the time was spent repairing and installing steam heating systems and ventilation. This would involve working with asbestos lagged boilers and pipework and he would have to knock off the old asbestos so that the repairs could be carried out.

Once the pipework was installed, the laggers would come along and lag it. They would follow the heating engineers through the buildings and be working just behind them.

A huge amount of asbestos dust was generated and he would be filthy when he returned home.

One of the jobs he worked on was at Barking and Battersea Power Stations where he fitted the pipework. Again, this involved working in close proximity with the pipe laggers. When he had to connect the pipework to existing systems he had to knock off the asbestos to make the connections.

He also recalls working for many years in the late 60s at C & A Modes at Oxford Street, where he helped to refurbish the store and the flats above it. The heating and ventilation systems were lagged with asbestos, and it was very dusty knocking the asbestos off and then the pipes were relagged next to him. He recalls that Matthew Hall were the largest pipe suppliers at that time and were always working alongside laggers from Kitsons, the largest insulating firm at the time.

Claiming compensation if exposed to asbestos at Matthew Hall

In the the 1950s, 60s and 70s, heating and ventilation companies were unaware of the dangers of asbestos and most heating engineers were not provided with any protection. If you have recently been diagnosed with asbestosis as a result of asbestos exposure as a heating engineer at Matthew Hall or a similar company, we can assist in making a claim for compensation.

Contact us on the number below and ask for Warren Miller or Kathy Cooke.