Shropshire and Telford NHS Hospitals Trust is to be prosecuted over an incident involving asbestos removal.
The Trust was first warned about suspected asbestos exposure at the Royal Shrewsbury Hospital in 2012. 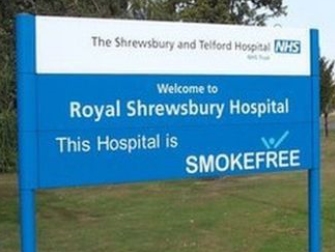 Mr Les Small, from Wellington, was the project manager at the time for the NHS trusts estates department.

He suspected that there was asbestos in the nurses accommodation at the Royal Shrewsbury Hospital and was worried that his workmen could be exposed to the material.

He was sacked after blowing the whistle on what he saw as unsafe working practices.

Asbestos exposure can lead to diseases in later life, typically 20 or more years after initial exposure. These include Mesothelioma Asbestos related lung cancer and asbestosis.

Mr Small then won a tribunal ruling that he had been unfairly dismissed in 2012. The Health and Safety Executive (HSE) has started an investigation into Shropshire and Telford NHS Hospitals Trust and now says it has agreed to prosecute the trust over unsafe working practices around asbestos removal. The trust said it would continue to work closely with the Health and Safety Executive (HSE).

Reacting to the news that the Trust will be prosecuted, the 62-year-old Mr Small said:

" I have mixed feelings. I'm pleased the HSE is prosecuting because it will hold the trust to account, but I'm disappointed it will cost the hospital money better spent on nurses or healthcare assistants. I'm really pleased the HSE is doing its job but I should never have been put in the position that I was. "

Mr Small has since said that the case had left him “unemployed and unemployable”, and has successfully challenged the judgement at the court of appeal and is requesting another tribunal to reassess the damages he received.

Asbestos Complaint one of many against The Shropshire NHS Trust

It is the latest complaint to involve the hospital trust which is currently being investigated regarding concerns over its maternity services. More than 100 cases of mother and baby deaths and injuries at Shropshire’s hospitals are being examined. Urgent action has been taken by the Care Quality Commission against The Trust following an inspection.

The Shropshire and Telford NHS Hospitals Trust is also preparing to close Telford's A&E department overnight for at least six months from November due to staffing issues. The decision was made by the trust board, prompting campaigners to call for the Government to step in with a 'rescue plan'.
The review was launched last year at the request of then Health Secretary Jeremy Hunt.

Asbestos was widely used in older hospitals but most are now asbestos free. However, this case does highlight the dangers that still lurk in several NHS buildings.

If you would like some advice on similar exposure, please call on the number below.