Children are more vulnerable to the dangers of asbestos than adults over their lifetime, according to The Committee on Carcinogenicity, an independent committee that advises the government on cancers including Mesothelioma.
The Committee was asked to investigate the relative vulnerability of children to asbestos compared with adults by the Department for Education. 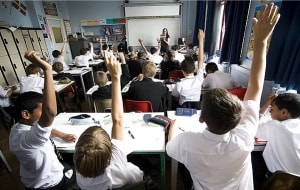 ” From the available data, it is not possible to say that children are intrinsically more susceptible to asbestos-related injury. However, it is well recognised... that, due to the increased life expectancy of children compared to adults, there is an increased lifetime risk of mesothelioma as a result of the long latency period of the disease.”

There are around 24,000 schools in England and about three-quarters are estimated to have some buildings with asbestos. Asbestos was used in the UK from the 1950s to the 1980s, often in insulation and fireproofing and can still be found in school walls ceilings, boilers and pipes. It is relatively harmless when undisturbed, but when released, the asbestos fibres can break off and become air-borne. This was highlighted recently on The Jeremy Vine Show which referred to a case where a teacher who died from Mesothelioma in June 2013 from pinning pupils’ work on to the walls in the classroom for a number of years. The simple act of putting drawing pins into walls had dislodged and released asbestos which she then breathed in.

Mrs Hagedorn – a teacher who was diagnosed with Mesothelioma in 2009 - warned:
” It is believed that a single fibre of asbestos may cause mesothelioma. There is no such thing as safe asbestos or a safe limit . . . . Children are thought to be much more susceptible than adults, though we won't know for another 20 to 30 years how many will already have contracted this cancer from exposure in schools because of its long latency period.”

The UK Government stated that there is no evidence that the lungs of children are more susceptible to mesothelioma, only that the risk to them is greater because of their life-expectancy and the time it can take for the disease to develop.

A spokes person for the Department for Education said:
” We welcome the Committee on Carcinogenicity's report on the effect exposure to asbestos can have on children, and have committed to consider the findings when reviewing our policy on asbestos management . . . . Schools already must comply with the strict legal duties on asbestos. We have also published guidance on the issue and work closely with the Health and Safety Executive (HSE) to ensure asbestos is managed properly in all schools. ”

The Department for Education said it was working hard with the HSE to make sure asbestos is managed properly in schools and that schools have to comply with ” strict legal duties on asbestos ”.

Campaigners want the government to pledge to remove asbestos from all of England's schools over time.
Michael Lees, the founder of Asbestos in Schools, said: ” We want them to look at their policy which says it is safer to leave it than move it and we want them to have an audit to see how much fibre is there.”