A new drug to help treat patients diagnosed with a devastating form of cancer will be available within months, according to its makers. Alimta is set to be commercially available by the beginning of next year for people with Mesothelioma, a rare cancer of the lung lining usually caused by exposure to asbestos. The drug, also known as Pemetrexed, is the first licensed treatment for Malignant Pleural Mesothelioma, in combination with Cisplatin, makers Lilly UK said today.

The cancer has no known cure, and Professor Hilary Calvert, of the Northern Institute of Cancer Research, at the University of Newcastle upon Tyne, said: ”This form of cancer is usually diagnosed at an advanced stage at which point treatment with radiation therapy or surgery is not an option. Most of the patients I see only have a life expectancy after diagnosis of only a matter of months.”

Until now there has been no licensed chemotherapy available and patients have been more likely to have treatment aimed to relieve the symptoms rather than to control the disease. 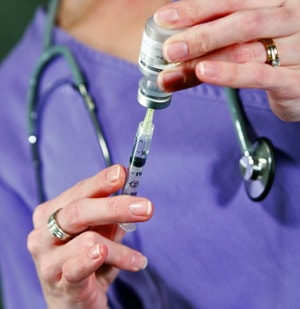 Alimta was licensed in February by the American Food and Drug Administration, which said patients lived, on average, nine to 13 months following diagnosis.

Patients given Alimta and cisplatin lived three months longer than those on cisplatin alone. The trials of Alimta have also seen a shrinking in the size of the tumour, thereby improving patients' quality of life, a spokeswoman for Lilly added.

It is estimated that in the UK more that 1,700 people are diagnosed with mesothelioma every year, decades after exposure to asbestos, and the numbers are set to peak at up to 2,500 in 2015.

Previously, those most at risk of exposure to asbestos were in industries such as shipbuilding, mining, and railway engineering. Areas of high incidence include London, Glasgow, Newcastle, Greater Manchester, Plymouth and Hampshire.

Earlier this year, the Government was warned deaths from asbestos-related diseases were reaching ”epidemic” levels by a law firm which said it was dealing with hundreds of claims for people with mesothelioma.

Asbestos was banned in the UK in 1999, but has been used in a variety of products over the years, ranging from gas masks and ironing boards to roofing materials and pipe lagging. The drug was licensed in the UK earlier this year. A spokesman for the Department of Health in the UK said officials were unavailable for comment.