New rules to cut the risk of potentially fatal asbestos exposure come into force today. They impose tough demands on building managers to carry out checks and control the dangers posed by asbestos. Around 500,000 buildings across Britain still harbour asbestos, most of them built or renovated between 1950 and 1980. Some 3,500 people in Britain die each year as a result of asbestos-related diseases - the biggest occupational health killer in the UK. 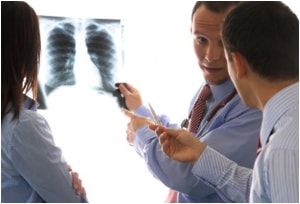 The new Duty to Manage rules will help save around 5,000 lives over the next 50 years, according to the Health and Safety Executive. Asbestos is considered the biggest occupational health risk ever faced by workers in Britain. The heat and chemical-resistant material can collect in the lungs if breathed in causing cancer of the lung lining called mesothelioma.

Although exposure to asbestos peaked in the 1960s, the annual number of deaths is expected to reach at least 4,000 annually, peaking between the years 2011 and 2015.

The new rules form part of the control of asbestos at work regulations. They relate to the management of commercial, industrial or public properties and the common areas of domestic properties.

” It must surely make good business sense to find out whether your premises contain asbestos, and then make certain that building and maintenance workers are warned in advance. ”

Bill Callaghan, chairman of the Health and Safety Commission, said:

” Asbestos is not yesterday's problem. We must now meet the challenge of managing the risks from asbestos, if we are to prevent another generation of workers suffering an early death at its hand. ”

Asbestos is the term used for several kinds of natural mineral which crystallise into long thin fibres. It was widely used in building work until 1980, particularly as an insulation material.

Diseases caused by asbestos take many years to develop after exposure. This meant the health risks of asbestos were not initially understood. In the past, those most at risk from asbestos-related illnesses were workers in industries such as shipbuilding and railway engineering. But the ongoing presence of the material in thousands of buildings means building and maintenance workers are now most at risk.

If you have been diagnosed with an asbestos disease within the last 3 years you may able able to claim compensation.

Who is responsible for asbestos duties in derelict buildings?

Who is responsible for asbestos duties in derelict buildings?

Asbestos contamination - latest news from around the world

Asbestos contamination - latest news from around the world

What informed the Mesothelioma Bill allowing victims to claim 80% of the average civil claim?

What informed the Mesothelioma Bill allowing victims to claim 80% of the average civil claim?