An increase in compensation payouts to mesothelioma victims

Last week the Department of Work and Pensions announced an amendment to the Mesothelioma Bill from earlier this year to increase the payments paid to victims of the asbestos induced disease mesothelioma, from 75% to 80% of the average civil damages award.

If a solicitor has evidence to show that mesothelioma developed as a result of asbestos exposure through work, the victim is usually able to make a compensation claim against the insurers of the company. In some cases the company or their insurers may not be traceable or have gone out of business and in these cases, the victims have been unable to secure any compensation for this terrible disease in the past.

The Mesothelioma Bill allows those mesothelioma victims diagnosed after July 25th 2012 and who have been unable to trace the insurers of companies where they worked and were exposed to asbestos to apply to the £380M compensation pot funded by the insurance industry from next month. The original figure for each claim was 75% of the average civil claim amount but last week Mike Penning MP (Minister of State and Minister for Disabled People) announced that this has been increased to 80% giving approximately £8K more to each mesothelioma victim. They may receive on average £123K plus an additional £7K as a contribution towards legal fees as originally agreed. 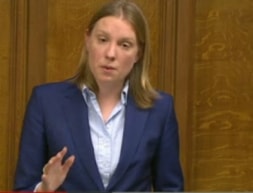 In a letter from Mike Penning MP to Tracey Crouch MP, he confirms the changes and apologises for not being able to increase the amount previously, as campaigned for so vigorously by Tracey Crouch.

He states that the company who will administer the scheme (Gallagher Basset International) have only just been confirmed and as such the final cost of the scheme administration has only recently been agreed and the payment tariff able to rise.

He sensibly notes that as The Bill is already underway, to withdraw it and relay a new set of regulations would take time and would stop many asbestos victims being compensated in the meantime.

So he proposes that the original bill goes ahead as planned based on the 75% figures so the fine detail of the bill can be discussed. As soon as the regulations come into force, he will immediately lay a negative instrument with a new table tariff showing the increased payments of 80%.

The Association of British Insurers condemned the plans to increase the payouts stating they were based on an untested series of assumptions. They were not involved in the discussions on the latest increase and are concerned about possible unknown costs and the actual number of claimants who may come forward. According to the government approximately 3500 mesothelioma victims are likely to make a claim in this way. The ABI were pushing for reforms to the legal process to stop long court cases and reduce the high legal fees involved in such claims.

The Mesothelioma Bill still ignores those victims who were diagnosed prior to the cut off of July 2012 and cannot trace their employers / insurers but it is recognised that the money pot may not be large enough for all cases. Labour Peer Lord Mackenzie thinks that after the first few years of the scheme being in existence that future sufferers may eventually be able to claim 100% damages.

We'll keep you updated with any ongoing changes to the Bill over the forthcoming weeks.

Are you unable to trace the company where you were exposed to asbestos?

If you have mesothelioma and are worried that the company where you were exposed to asbestos is no longer trading, it is still worth calling us to check. Our Mesothelioma Solicitors will be able to undertake an extensive search of various databases to find the company or the insurers. If the insurers are still not traceable she will advise you on claiming from the government compensation money.
Please contact us via the number or form below. You are under no obligation to take up our services but we may be able to assist you.