Saga of the Hartlepool Ghost Ships

A bitter legal and environmental fight has been raging in Hartlepool for 10 years over the fate of rusting American war ships. Local businessman Peter Stephenson from Able UK won a contract to scrap 13 US ships in 2003. This resulted in protests from local Environmentalist groups including Friends of Hartlepool which was formed in 2003 specifically to fight Able UK's plans. They claimed that a precedence would be set and that Hartlepool would become ”the dumping ground of the world”. Able UK countered this by saying that the new jobs that would be created would boost the local economy. 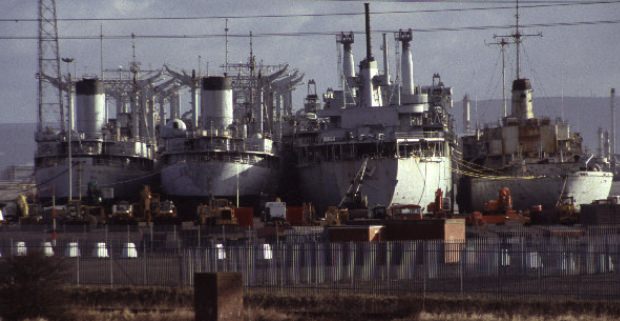 The ships were known to contain 100s of tonnes of hazardous waste, including asbestos. This lead to 5 years of debate and court cases before the work could begin. The local council was worried about the effect on the local wildlife, so it was not until 2008 that a waste management licence was issued by the Environment Agency.

The Environment Agency, which had initially given approval, had since changed its mind because of fears of the asbestos and other hazardous substances in the ships.

Due to the delay, only 4 ships arrived in Hartlepool from Virginia where they had been for several decades.

Mr Stephenson estimated that they delay cost the town around 200 jobs and £120 million in wages as the contract to dismantle any more ships was lost.

Concerns over asbestos in landfill site

The Friends of Hartlepool group was still concerned about the company's Seaton Meadows landfill site, which contains some of the asbestos and other potentially dangerous materials from the recycled US navy ships.

Mr Stephenson stressed that the materials in the landfill site, including chemical waste and asbestos was safe. He said:

” It has been proven that the concerns about the environmental impact of the American ships were not valid.
All the regulatory authorities had gone through the proper processes when we got our original planning permissions.
These protesters came out making accusations which were totally untrue. There were less than 18 lorry loads of waste from the ships that went to landfill, which was less than 2% of the total tonnage we received. The rest was successfully recycled.

I am aware that some of the protesters have continued to raise concerns about the material in the Seaton Meadows landfill. But these are unfounded, just as the concerns about the vessels were unfounded.
I can assure the public that the legislation in the UK and the strictness of the regulatory authorities here ensures that there could never be anything in there that would harm anyone in the surrounding area. ”

Feedback from ex-mayor of Hartlepool

Stuart Drummond, who in 2003 was just a year into his job as the town's mayor, has some sympathy for Able UK. He said:

” I think, knowing Hartlepool very well and, without being detrimental to the area, we are quite an insular town and something like this can get blown up very quickly. Rumours spread very quickly and if the right facts aren't portrayed in the first place things can get blown out of all proportion, which I think is what happened with the ghost ships. When it came down to it, some of the people involved in the campaign groups were basing a lot of their arguments on hearsay and perception and not very much fact. ”

But Jean Kennedy and Iris Ryder from Friends of Hartlepool remain defiant:

”Hartlepool is in our hearts, minds and souls, so we'll fight on to the last drop. It's been 10 years and we still haven't stopped and we won't stop.”

*Main Image: US Ghost Fleet by Chris Allen is licensed under Creative Commons