Mesothelioma Risk from Gas Masks. If you are thinking of wearing a World War 2 gas mask as fancy dress or in a school or museum demonstration - then think again. There may be a future risk of developing mesothelioma or other asbestos related diseases from inhalation of asbestos fibres that could be contained in the mask filter. 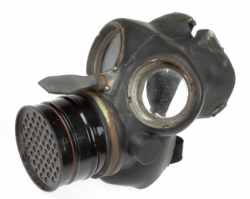 Gas masks were commonly used in World War 2 and sometimes known as Field Protective Masks. They provided a sealed cover over the respiratory passages i.e. nose and mouth, with the aim of protecting wearers from inhaling toxic gases and other biological agents that were used during the war.
The filters present in the masks may contain blue asbestos fibres which, when sealed, do not cause damage. However over time the filters degrade, releasing the fibres into the air which may be subsequently inhaled by the wearer.

There is a possibility that the wearer may develop an asbestos-related disease following inhalation of the asbestos fibres. There is a mesothelioma risk from the gas masks as this disease only requires inhalation of a minimal amount of asbestos. The disease has a long latent period so the person would not be aware of any symptoms for maybe 20 – 40 years following exposure.

Not all gas masks used in the war contained asbestos but there is no certainty as to which ones did. Some records are available for the masks but they are usually poor even when they do exist. Some tests have shown that Australian and Russian WW2 gas mask filters contained 15% asbestos. It is better to assume that all masks pose an asbestos risk unless proven otherwise.

There is also concern over helmets which were used in World War 1. The Imperial War Museum reports that Brodie army helmets contained white asbestos and again people may be at risk from inhalation of loose fibres when handling these items. e.g. in a museum or as part of a school demonstration.

The Health and Safety Executive and Members of the Joint Union Asbestos Committee have recently written to all schools regarding the use and disposal of such artefacts. They have advised schools to stop using them with immediate effect . They provide guidance on the safe disposal of such items e.g. by double bagging them, taping, labelling and ensuring removal by a licensed asbestos contractor. Another option is for the masks to be tested for asbestos and, if they contain it, then they may be made safe by removing the asbestos, again only by a licensed asbestos contractor.

Historians and some school groups note that it would be a shame to lose these artefacts that are part of our history but recognise the need to avoid any future health risks for staff, pupils and visitors.