Dr Chris Carter and a research team at Strathclyde Institute of Pharmacy and Biomedical Sciences in Scotland have devised a novel system for delivering chemotherapy drugs to mesothelioma patients and asbestos lung cancer patients.
The chemotherapy drug, Cisplatin, can be delivered to the patient via inhalation through a nebuliser instead of delivery by the traditional intravenous route.

In theory, mesothelioma patients and lung cancer patients could receive safer, quicker and more efficient chemotherapy without experiencing some of the side effects of current delivery systems e.g. kidney damage.

Cisplatin or 'Peyrone's Chloride' after its founder Michel Peyrone, was first created around 1850 but it wasn't until the 1960's that researchers investigated its biological effects, leading to clinical trials using cisplatin for cancer treatment in 1971. 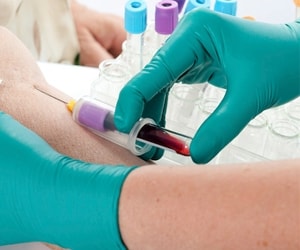 Since then it has been widely used in many chemotherapy regimes and is still used today despite the many new chemotherapy agents which have been introduced over the past 30 years.

Like many chemotherapy drugs, cisplatin has traditionally been administered intravenously, dissolved in a saline solution and transported around the body via the venous system resulting in take-up by organs such as kidneys, liver and intestines.

Administration time is typically 30 minutes to 2 hours. There are many side effects associated with the use of cisplatin when used intravenously.

Most side effects although unpleasant and distressing for the patient are generally reversible and subside when treatment ends. However the side effect of nephrotoxicity which causes damage to the kidneys is cumulative and and can result in serious complications for the patient after chemotherapy ends.

Dr Chris Carter, Senior Lecturer at Strathclyde, said ”By delivering cisplatin, one of the most widely used drugs for lung cancer, in a vaporised form, we would be able to get it to the cancerous cells and avoid the damage to healthy cells which can be hugely debilitating to patients. It would make the treatment far less onerous for them and we hope it would help them to live longer.”

Combination chemotherapy is often used for the treatment of mesothelioma with Cisplatin being used in combination with newer drugs such as Pemetrexed (Alimta).

If you have recently been diagnosed with mesothelioma and would like some advice, call us on the number below: