Pineapple extract may help in the treatment of Peritoneal Mesothelioma

Pioneering researchers from New South Wales, Australia tested the addition of bromelain to two common chemotherapy agents in laboratory tests and found it enhanced the effect of cisplatin on peritoneal mesothelioma cells.

Peritoneal mesothelioma is less prevalent than the more common pleural mesothelioma and is found in the peritoneal lining in the abdominal cavity. Its symptoms can be vague and as a result diagnosis is often late. Prognosis is generally poor with few patients being alive at 12 months. The optimum treatment for this type of disease appears to be cytoreductive surgery and hyperthermic intraperitoneal chemotherapy which can prolong life for up to 3-5 years. The chemotherapy agents routinely used are cisplatin or pemetrexed. 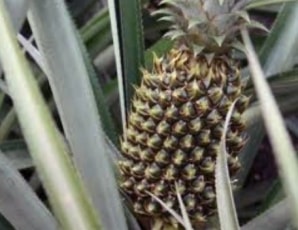 Bromelain was first isolated from the pineapple fruit over 100 years ago in 1891 by a Venezuelan chemist Vicente Marcano.

Although mainly extracted from the stem of the pineapple, it is also found in the juice of the fruit.

It has been used in Central and Southern America for many years as a folklore medicine utilising its natural inflammatory properties. Bromelain is thought to be of use in treating arthritis, skin burns and in blood clotting although there is scant medical evidence for this.

Bromelain was first introduced into medical research in the late 1950’s.

Bromelain has been used in the management of pancreatic and breast cancers and is thought to suppress the cancer cells. In a laboratory setting, mice with experimental colitis were given bromelain for 6 months. It was found to lessen the severity of colonic inflammation and decrease the number of cancer cells in the colon (1).
It is currently regulated by FDA as a dietary supplement.

The protein MUC1 found in mesothelioma cells is glycosylation-dependent giving them the ability to spread, expand and resist chemotherapy. Bromelain extract is a mixture of protein-digesting enzymes, cysteine proteinase, which hydrolyses glycosidic bonds causing the protein MUC1 to breakdown.

The researchers utilised this property by testing varying amounts of bromelain on cell lines. The cells were also treated with bromelain and cisplatin or bromelain and 5 FU. Reporting in the Journal of AntiCancer Drugs (2), the researchers stated that adding bromelain improved the effect of cisplatin in the cells but did not increase the cytotoxicity of 5FU.

The researchers have been greatly encouraged by these results and hope to move into a clinical trial phase within the next 12 months. The study focussed on peritoneal mesothelioma cells but it is hoped that it may be applied to pleural mesothelioma cells, the commoner form of mesothelioma.

We will bring you updates of this progress over the next few months.