The dumping or fly-tipping of asbestos material in a non designated area is illegal and people doing so will be prosecuted.

Fly-tipping on a small scale is annoying, an eye-sore and an inconvenience to whoever has to remove the rubbish. Consider that there are more than a million reports of illegally dumped rubbish each year (Watch Dog 2011) then it becomes more than ‘just an eye sore’ and if asbestos, or an equally nasty substance, is contained amongst the rubbish, it becomes a health hazard too. 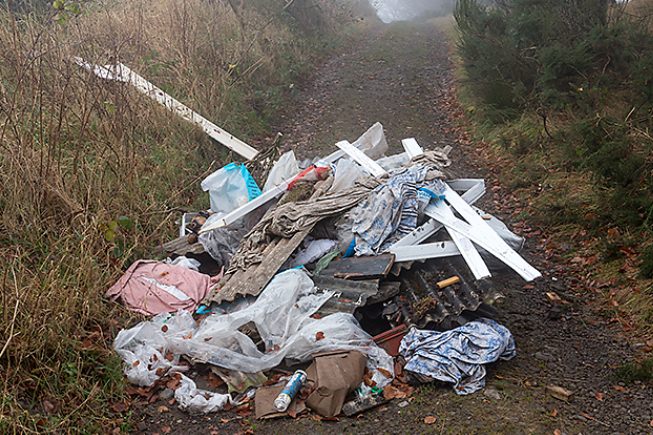 There is a charge to have this type of waste collected or, if disposing as an individual, at the licensed waste site itself. Anyone removing someone else's rubbish must have a waste carriers licence.

By fly-tipping rubbish, people think they are saving money by avoiding these charges. Anyone caught fly-tipping can be prosecuted – the main legislation is the Environmental Protection Act 1990 (EPA 1990), Sections 33, 34 and 59 further supported by the Clean Neighbourhoods Act 2005. Those people fly-tipping asbestos are also in breach of reg.10 of the Control of Asbestos Regulations 2006.

Below are just some of the examples of convictions for asbestos fly-tipping over the previous years:

April 2013 - Portsmouth News: A man was ordered to pay thousands of pounds to clean up the mess after admitting 3 counts of fly-tipping including cement roofing sheets containing asbestos.

2013 – Liverpool News A middle aged woman was found guilty of fly-tipping asbestos tiles near to a junior football teams’ changing rooms. She said she thought the bags had been full of cardboard and mistaken the changing rooms for the Council’s waste reception centre. She was fined £200 and ordered to pay costs of £500 with compensation for the specialist clean-up and disposal of the asbestos of £712.80.

May 2012 - shponline.co.uk: A roofer was convicted of fly-tipping asbestos on a road in Kent in 2011. He had dismantled a roof for a client and took the rubbish to two scrap yards who refused to take it as they noted it contained asbestos. After failing to find someone to take the rubbish he dumped it on the roadside. He pleaded guilty and was charged costs of £1020 including a payment of £720 to Medway Council for clearing the asbestos - in addition to wearing an electronic tag and a curfew order between 8:30pm and 6:30am for 4 months.

2011 - Watch Dog: Southampton Council brought a prosecution against a man who was blatantly tipping (including asbestos waste) over a long period of time for financial gain. He was subsequently jailed for 2 years.

Asbestos fly-tipping is still happening today. Since September there have been 19 incidents of asbestos being fly-tipped in NE Lincolnshire, including seven in January 2014 in a variety of NE Lincolnshire locations including Grimsby, Humberston and Ashby-cum-Fenby.

More than 12 tonnes of asbestos has been illegally dumped during this period costing NE Lincolnshire Council an approximate figure of £5000 to safely dispose of it. For more information see www.nelincs.gov.uk

If you see someone fly tipping, don’t approach them or disturb the site or touch the rubbish. Report the incident immediately so that the fly tippers can be prosecuted. Do not put your own health at risk.