The dangers of asbestos were unknown when it was first used as a building material in the 50s, 60s and 70s but history has shown it to be a dangerous substance once disturbed and its fibres are released into the air.

Unfortunately many workers could still be exposed to this health hazard through companies not complying with the health and safety laws regulating this substance and putting profit above the health of their staff.

Below are two examples reported by HSE last month where companies or directors of companies were prosecuted for breaching regulations.

Asbestos in the Roof at Mansfield Soft Furnishings Ltd 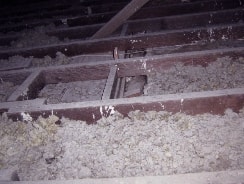 Up to 30 workers at Mansfield Soft Furnishings Ltd, a Rochdale-based re-upholstery firm, were exposed to potentially deadly asbestos fibres for nearly five years.

The company moved into new premises in 2007 and stored equipment in a storage space under the roof which was later shown to contain asbestos. Asbestos fibres were disturbed and released into the air when workers moved foam and furniture under the roof.

Mansfield Soft Furnishings Ltd had not previously undertaken an asbestos survey on the building despite workers concerns about possible asbestos.

Whilst visiting the building on another issue, a HSE inspector noticed an asbestos-like substance under the roof and served an Improvement Notice on the company. An asbestos survey was arranged and it showed that asbestos was indeed present in the roof. The HSE then proceeded to serve a Prohibition Notice banning access to the building until it had been decontaminated. The terms of this Prohibition Notice were breached when the company director and another worker entered the building to remove furniture so that a lucrative delivery could take place.

The company pleaded guilty to the charges and were fined £30K and the company director was fined an extra £10K for breaching the Prohibition Notice.

A Suffolk window replacement company, Frames Conservatories Direct Ltd (FCDL) was fined £24K and £10,571 costs after pleading guilty to breaching regulations 8(1) and 11(1) of the Control of Asbestos Regulations 2012.

The company were contracted to replace window units at a local school over the summer holidays. As part of the job, it was known that asbestos panels would require removal and the company confirmed that as a registered contractor it would undertake the work. This was not the case.

Employees at FCDL started to undertake the work but were not informed by their bosses at the company that they would be handling asbestos and as such did not take the required health and safety precautions. The employees and the head teacher alerted the HSE after other contractors called in a licensed asbestos contractor after finding suspect material. The asbestos contractor noticed that the workers installing windows were possibly handling asbestos containing materials and work was stopped. The HSE subsequently investigated the site.

Following the court case the HSE inspector noted that the employees of the company were exposed to asbestos levels many times above the Control Limit. It was fortunate that there were no students or staff on site during this period. The school had to pay over £100K on environment cleaning and equipment replacement as a result of this breach of regulations.

If you have been exposed to asbestos through your work and developed an asbestos related condition, you may wish to contact us for some advice on claiming compensation. We are available 7 days a week.