Health officials have admitted that the 120 Grenfell Tower flats contained high levels of asbestos. This was released during the recent fire and blew over neighbouring homes. The Asbestos was found in the artex ceilings and in panels inside airing cupboards.

The toxic substance can cause fatal lung cancer mesothelioma if inhaled, and there are fears the substance
fell over hundreds of homes to the east of the tower. 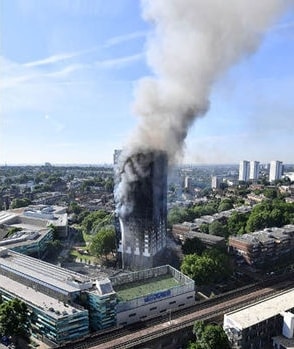 The Grenfell Action Group website, which had warned about fire safety before the fire, pointed out the asbestos risk. It said:

"These same forgotten households are also subject to other hidden dangers that no-one, not a single official or media reporter - has made any public reference to asbestos.

"There was lots of this in Grenfell Tower, notably in the artex coated ceilings of every apartment, and there were small solid asbestos panels in all apartments too."

The report said residents had previously been assured that it was safe if not disturbed.

" These assurances were offered as justification for a policy of avoiding the substantial cost and disruption of removing the asbestos.

" The Grenfell Tower inferno has surely released large amounts of asbestos laden smoke, dust and ash into the air of the entire surrounding area and who knows what other toxic substances, lead and other metals etc, may have been reduced to ash and carried by the wind and smoke all over the neighbourhood.

" So why has no-one in authority made any public statement about this risk to public health,
or begun the process of measuring the concentration of these deadly toxins in the air and the local environment? "

The Grenfell tower was build in 1974, a time where asbestos was still very widely used. The risk posed by asbestos in the building was also debated on Reddit.

" I've been a member of a voluntary fire fighter unit - a small village with a lot of old houses. We have compiled a map, in which houses asbestos had been used, in case of fire we would have to take special measurements regarding the safety of our firefighters.

" We had (to make) special plans for containing the water used while fighting the fire. This tower was built in 1974, a time where asbestos was still used almost everywhere. I can't imagine that is was completly removed in between or while doing the refurbishment. If there was still an amount af asbestos, you will find a large area contaminated with it now.
Does someone have some insight into this? "

"We know that bound asbestos, contained in building materials such as plaster or fibre board, was present in Grenfell Tower in ceilings and header panels inside airing cupboards.
"It is possible that very small amounts of asbestos fibres will have been dispersed within the smoke plume but would have formed only a small fraction of the smoke and particles released in the fire; all smoke is toxic and any asbestos would present a minimal additional risk to health.

" Asbestos related diseases are typically associated with a long term workplace exposure to high levels of airborne asbestos fibres. Safety officers working with teams currently on the site have tested the air within Grenfell
Tower for dust and asbestos and have not detected any levels of concern.

" When work commences to clear the site there will be a system of engineering work that will prevent any asbestos
being released from the site and a programme of regular environmental air monitoring conducted to ensure that
both contractors and local residents are not put at any risk. "