Asbestos was widely used in the UK in the construction of buildings from the 1930s until 1999 when the UK banned new use through the Asbestos Prohibitions Amendment regulations. It is estimated that approximately half a million non domestic premises in the UK still contain asbestos. This includes many churches and other places of worship. 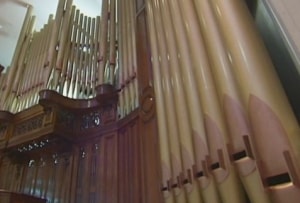 Even some of our most historic churches which were built before the use of asbestos may still have asbestos present if they had renovations after the 1930s.

The regulations from the HSE (Control of Asbestos Regulations) have been in place since 2006 so it is probable that most churches will have had an asbestos survey and the trustees are aware of any potential asbestos risk.

It is a legal requirement that the managing trustees of a church have a “duty to manage” any risk arising from asbestos in church buildings.

An initial survey should be undertaken by an asbestos specialist but the trustees of a church have the responsibility to manage any ongoing risk.

Asbestos was often used as thermal lagging or insulation in buildings and may be present in:

Asbestos does not cause a problem when fully covered and undisturbed but if fibres are released and inhaled by a person they can cause potentially life threatening diseases. Therefore it is important that the trustees of every church or place of worship are asbestos aware so if any building works are carried out, the asbestos presence is known and it is either removed safely or is left undisturbed by any maintenance teams.

Examples of asbestos use in churches

Just this month during renovation work at St Giles Church in Oxford, asbestos was found in old pipe lagging under the floor. This caused work to be stopped whilst the asbestos was removed. It would not have been safe for the builders to continue to work in such conditions.

In September of this year asbestos was found to be present in the ceiling of a church following a refurbishment and demolition asbestos survey undertaken prior to demolishing Chingford Hatch Methodist Church. The demolition team outlined the safe way that they would remove and dispose of the asbestos in an attempt to reassure local residents prior to undertaking the work.

In 2011 blue asbestos was discovered in the pipe organ at Berwick Parish Church. Many years previously the pipes passing through the organ chamber were lagged with asbestos to reduce heat damage to organ pipes and leather bellows. This was safely removed by a team of specialists.

If you have an asbestos related disease after being exposed to asbestos whilst undertaking building work at a church or place of worship, and require advice, then please call the free phone number below and ask for Warren Miller or Kathy Cooke. Our asbestos solicitors have advised on similar cases.