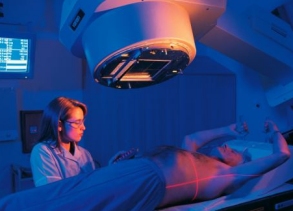 One of the main difficulties in radiotherapy for mesothelioma was achieving adequate irradiation of the pleural surface of the lung without irradiating the underlying lung subsequently causing more problems for the mesothelioma sufferer.

Recent technical advances in the delivery of radiotherapy have raised some hope in the treatment management of mesothelioma sufferers.

What is TomoTherapy for Mesothelioma?

TomoTherapy™, a new advanced form of radiation therapy, was developed by the company named TomoTherapy Incorporated. TomoTherapy™ was first available in the UK at Cromwell Hospital, a private hospital in London specialising in all cancer treatments including mesothelioma. More recently TomoTherapy™ has been introduced at several NHS hospitals across the UK. The technology of helical tomotherapy is based on the combined principles of linear accelerator (standard radiotherapy) and computed tomography (CT) technology.

The TomoTherapy Hi-Art System™ combines intensity modulated radiotherapy (IMRT) with a helical delivery pattern to deliver the radiation treatment according to the treatment plan. Therefore the required radiation is concentrated on the tumour area whilst minimising radiation to surrounding healthy tissue e.g. the underlying lung, heart, spinal cord in the case of mesothelioma. Tomotherapy is able to treat unusual shaped tumours, particularly when they are wrapped around sensitive normal tissues (the lung), enabling higher doses of radiation to be used which in theory would improve its effectiveness.

A recent study conducted at the Greater Poland Cancer Center located in Poznan, Poland, and also at the San Raffaele Scientific Institute in Milan, Italy researched the effects of TomoTherapy on mesothelioma, as well as other aggressive cancers. TomoTherapy showed promise in increasing the likelihood of a favorable prognosis for mesothelioma sufferers. Mesothelioma typically results in the development of aggressive tumours in various areas of the body such as the chest, abdomen, lungs, and in the mesothelium - or lining - of other various organs and bodily structures.

In the study conducted at the sites above, two mesothelioma patient groups were formed and both were treated with TomoTherapy. One of the research groups received an integrated boost treatment delivered at the same time as the radiotherapy treatment. The other research group did not receive the boost treatment. It was found that the patients who received the simultaneous integrated boost treatment had a 72% increase in one-year survival while the patients that did not only experienced an increase of 43%. It was also found that the treatment group experienced longer cases of relapse.

An online report by French and Canadian researchers in June 2011 outlined the use of helical tomotherapy (usually following extrapleural pneumonectomy) in mesothelioma treatment and found that it can result in excellent local results. In a study involving 24 patients, more than 50% of the group continued to be disease free 24 months after diagnosis. Although only a small study it does bring greater hope for the survival of mesothelioma patients.

Researchers hope that Helical Tomotherapy will be particularly helpful in preventing local recurrence of the mesothelioma cancer and will not be as toxic as some other methods. Side effects in a small research group have been limited to temporary effects including skin redness, minor cough, fatigue, nausea, and painful swallowing.

Many thanks to our medical consulant Kathryn Cooke, former head of Radiotherapy pre-treatment at the Cromwell Hospital in London