This case is typical of many claims for mesothelioma where the claimant had only been in contact with asbestos very briefly many years ago. It demonstrates that a small amount of exposure can cause the disease in later life. 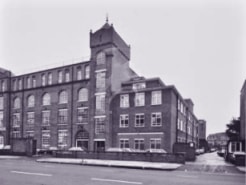 The claimant worked for most of his life in sales and had no contact with asbestos. He was still quite young at the time of the Mesothelioma diagnosis and was still working.

In fact, when we took the case details he could not recall contact with asbestos at work, home or school. However he did recall brief employment at Freemans, the catalogue company as a young man.

Freemans was founded in 1904 by H.A. Freeman, W.E. Jones, A.C. and S.C. Rampton in a terraced house in the London suburb of Clapham. The company was acquired by Otto GmbH in 1999 and in 2000 its administrative department was merged with Grattan plc, under the banner of Otto UK.

He worked in South East London at a warehouse and remembered specific instances of exposure to asbestos at that time. The roof of the building was strengthened with steel beams and was painted with a fireproof material that Mr A thought contained asbestos.

He recalled that occasionally the fork-lift trucks that were used to move the stock would come into contact with the steel beams when stock was placed on high shelves. This contact would dislodge the asbestos coating which would fall to the floor, releasing asbestos fibres into the air. Mr A was required to dispose of these lumps and asbestos dust.

Most Mesothelioma cases do not go to court, but Freemans Plc decided to fight the case - at the High Court. Freemans built their defence around the fact that though the dangers of breathing in asbestos dust were increasingly apparent, it was not known at that time that this could lead to a mesothelioma diagnosis.

Our solicitors obtained a report from a structural engineer who stated that - in his opinion - the beams were probably coated with asbestos and the damage caused by the fork-lift trucks would have caused this asbestos to be released into the air. In his statement the structural engineer also said that the contact with asbestos could have been prevented if Freeman had taken the necessary precautions. He also confirmed that the level of asbestos exposure was in excess of the legal guidelines at that time.

If you worked in a warehouse from the 1950s to the 1970s, there is a chance that you may have been in contact with asbestos.

If you were a fork-lift driver or general labourer and asbestos was used to fire-proof the building - as in this case - any accidental collisions with the building may cause the asbestos to become airborne.
Inhalation of this dust may cause an asbestos disease like mesothelioma in later life.

For advice on whether you can claim for Mesothelioma, please call 0800 923 0046 and ask for Warren or Kathy.