Mr M was only in his early 60s when he was diagnosed with mesothelioma late in 2013. He instructed our specialist solicitors immediately and his claim (which was complex because of his youth and the fact he was still working and running several businesses) was settled for in excess of £500,000 within 18 months of instructions.

Mr M had to be advised that if he pursued and settled the claim personally during his lifetime the compensation that would be payable would be considerably less than would be due to his widow after his death.

After many months of trying to persuade the Defendant to negotiate an enhanced settlement during Mr M’s lifetime he had to take the very difficult decision to put his claim on hold for his wife to conclude subsequently.

In the meantime the Defendants were ordered to pay £200,000 on account of his claim. They then finally agreed to a meeting to discuss settlement and Mr M’s claim was concluded.

Mr H worked for the Post Office, from the 1930s to the 1980s constructing Telephone Exchanges. At this time, the Post Office was responsible for telephones as well as the postal system. There was a huge increase in demand for telephones in the 1960s and there was a conversion programme from manual to automatic exchange working throughout the UK, so hundreds of telephone exchange engineers would have been exposed to asbestos.

Many of the telephone exchanges used a mix of Pre-2000 type switching equipment, many of which were fed by the original waxed silk and wool insulated cables with black enamelled conductors and braided cable sheaths impregnated with asbestos. 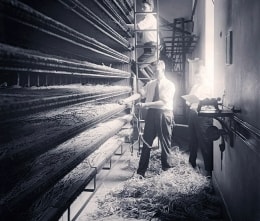 Mr H worked with asbestos covered telephone cables for much of his time with the Post Office. When the cables were cut to the required lengths, asbestos dust was released into the air and in the early days no protection was given against this.

With asbestos dust ingrained in the wax, it was not possible to tell the colour of the insulation on any of the wire terminations from these old cables, as they had all turned black.

The old Pre-2000 selector bank wiring was brittle, but some spare positions, fitted nearly thirty years before, were brought into service with re-used switches recovered from other exchanges up country.

The cable holes were filled with packs of blue asbestos to safeguard against fire and white asbestos covering boards were also used in the process.

It wasn't until 2011 that Mr H, then 92, went to see his doctor complaining of a dry cough and breathlessness. At that time he has noticed that he had lost a lot of weight. Due to his history of asbestos exposure and symptoms, his doctors thought that he probably had malignant mesothelioma. However, Mr H was very ill at this time and because of his age it was decided that a diagnosis could be not be confirmed by biopsy.

Claim for Pleural Mesothelioma settled out of Court

Mr H contacted us shortly after this to see if he could claim any compensation given that the mesothelioma diagnosis was not formally confirmed. A specialist mesothelioma solicitor visited the claimant at his home to talk him through the options. They obtained a medical report stating that Mr W was probably suffering from mesothelioma due to his asbestos exposure at the telephone exchange.

The solicitor sent a letter of claim to the solicitors of the defendant company who questioned whether, in the absence of a diagnostic biopsy, that he actually had Mesothelioma. They suggested that the compensation claim should wait until Mr H passed away and a post mortem could be carried out to confirm the Pleural Mesothelioma diagnosis.

However, the claimant had no dependants, so a claim was issued in the High Court so that he could have a chance of obtaining some compensation during his lifetime. The High Court judged in favour of Mr H, but allowed the defendant a few weeks to obtain their own medical evidence. The Defendant confirmed in the balance of probabilities, the claimant had Pleural Mesothelioma and settled for a little over £100,000.

If you have worked as a telephone engineer from the 1950s to the 1970s, there is a chance that you were exposed to asbestos, especially in the telephone exchanges which were riddled with asbestos. Our solicitors have dealt succesfully with many such cases against the Royal Mail and British Telecom and will be able to offer advice on whether you could claim.
Call us on the number below to start the claims process and ask for Warren Miller or Kathy Cooke.