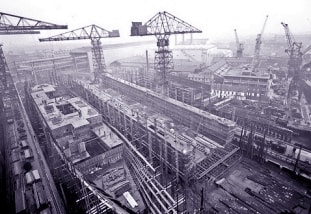 Historically, shipyard workers are among the most frequently exposed to the dangers of asbestos.

Asbestos was regarded as an ideal material for the shipbuilding industry because of its heat resistant qualities and ability to resist corrosion. It has been used to lag boilers, pipes and incinerators.

However, little attention was paid to the airborne asbestos dust and many of the confined spaces in ships were poorly ventilated. This and the lack of protective clothing led to excessive asbestos exposure on board ships.

Mr K was diagnosed with Mesothelioma and passed away recently. He was 66.

He was exposed to asbestos when he worked as an apprentice for Vickers Armstrongs in the Newcastle Shipyards.
Vickers-Armstrongs was one of the most important warship manufacturers in the world and had shipyards in Barrow-in-Furness in Cumbria and the Naval Yard of the River Tyne where Mr K worked.

The reason the sum awarded was in excess of £760,000 was mostly determined by his earning potential at the time he was diagnosed with mesothelioma. After leaving the Shipyards in Newcastle, he worked in the off shore oil industry and was earning 6 figures a year. He took the decision to carry on working after the diagnosis and our solicitors were able to establish that his skills were in great demand and that many workers continue into their 80s

However, the oil industry is very volatile and many countries that produce the oil are politically unstable. This instability added a layer of complexity to the case, especially as he was working in Egypt when the 'troubles' started, which affected his earning potential.

Due to a skills shortage in his area of work he was in great demand. However, the nature of his work meant that he rarely had long term contracts and frequently changed jobs. This further complicated the case and had a bearing on the amount that was awarded.

He also had 2 dependants - his wife and step-daughter who live in Brazil. The exchange rate between the Brazilian peso and the dollar, as well as the growth of the economy in Brazil also meant that his wages were worth less year on year, all of which meant he would have had to continue working for as long as he could.

If you, or a member of your family have been diagnosed with Mesothelioma and worked at a shipyard, we will be able to help you. Please note that the amount of compensation awarded in this case was exceptional. However, our mesothelioma solicitors will aim to maximise the value of your claim and we are available to answer any questions you may have.
Contact us by calling our freephone number: 0800 923 0046 and ask for Warren Miller or Kathy Cooke.