Mr I joined the Merchant Navy and took a marine engineering course and on completion qualified as an engineering fireman.
His first job was in the engine rooms of the Queen Elizabeth liner, owned by Cunard. 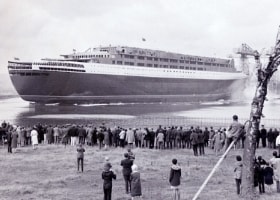 The boilers, turbines and pipe work throughout the engine room were lagged with asbestos. To repair leaking pipes or damaged flanges he would have to remove the asbestos first.

Sometimes he would have to hammer it off but on other times it was possible to undo the banding and then remove the asbestos from the pipe work.

Once the repair had been completed it was then necessary to reapply the asbestos, sometimes with the asbestos that had been removed, other times with preformed asbestos.

This would require cutting suitable lengths of asbestos with a hacksaw and then attaching this to the pipe work. Sawing into the asbestos sections caused a lot of asbestos dust which he breathed in most days.

The next ship he worked on was the Salamanca, a cargo vessel owned by the Pacific Steam Navigation Company. Again the pipe work in the engine room was lagged with asbestos and if there was a problem, his job was to remove the asbestos, undertake the repairs and then replace the asbestos.

He then returned to work for the Cunard Line on the liner Carinthia which was a steam turbine driven liner and the work he did on it was identical to that on the Queen Elizabeth. Once more the boilers, turbines and pipe work were lagged with asbestos.

The next ship he was on was the R.F.A. Tidepool. This was a Royal Navy fuel tanker ship. Although it was a Royal Naval vessel the majority of the crew were Merchant Navy. The Tidepool role was to refuel Royal Navy ships during exercises. The Tidepool was a steam turbine ship. Again, the boilers, turbines and pipes were lagged with asbestos and he would be required to maintain these. In addition, he was trained to assist with the helicopters that were on board and dealing with the boson’s chair. This was a device that was sent from ship to ship which would then take the fuel lines from the Tidepool to the ship that we were refuelling.

The last ship he worked on was the Scythia. This was a Cunard Liner doing the trip from Southampton to New York. It was a steam turbine ship and again the engine room was full of asbestos.

Mesothelioma after working for Cunard or The Pacific Steam Navigation Company

If you worked in the Merchant Navy from the 1940s to the 1970s, you will almost certainly have been in contact with asbestos.
If as a result of this exposure, you have developed an asbestos disease, our solicitors can help you to claim compensation.
This case is typical of hundreds of similar cases our solicitors have successfully brought against merchant navy companies.
Contact us by calling our freephone number: 0800 923 0046 and ask for Kathy Cooke or Warren Miller.