This is an example of many cases we have dealt with where there has been secondary exposure to asbestos. This usually occurs when the husband worked with asbestos and brought the dust home on his clothing. His wife would then launder the clothes after shaking off the asbestos dust. This was especially the case in the 1950s and 1960s when fewer people had washing machines and much of the washing was done by hand. 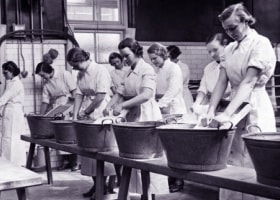 Mr P worked at Liverpool Docks from the 1960s to the mid 80s, he was a stevedore, loading and unloading goods. Some of the cargo ships came from South Africa and Canada and carried sacks of asbestos. He was not supplied with overalls and was dusty and dirty when he returned home.

” He would leave his clothes on the floor in the bedroom. Mainly he used to keep the same clothes all week long as they had not got too dirty. I used to then launder the clothes. I used to take them into the yard and shake the dust off them, I then hand-washed everything in the sink. We had a small spin dryer which I then used. Some days he came home covered in what looked like white flour. I know that he unloaded a lot of different types of materials and that he would have worked with asbestos. I cannot say how often this would have been, though I washed his clothes throughout his time as a docker. ”

Asbestos exposure was confirmed by 2 witnesses who worked with Mr P at Liverpool Docks in the 1960s.

” Asbestos arrived in hessian bags, they were frail and ripped easily. Our job was to hook them so that they could be hauled out of the hold. The asbestos was often stored in the hold over copper and the bags used to rip on it. As it was lifted out of the hold, the amount of dust that fell was tremendous. The dust was always there. It was like a snowstorm. We were covered in it. I was ignorant as to what it was, but it got in my hair, nose, ears and clothes. ”

Diagnosed with mesothelioma after secondary exposure to asbestos?

If you have been diagnosed with mesothelioma from secondary asbestos exposure, such as from washing clothes, our expert lawyers may be able to help you to make a compensation claim.

Contact our freephone number 0800 923 0046 and ask for one of our senior specialists, Kathy Cooke or Warren Miller.