Mr L started work as a labourer for a building firm - T. Brooks of Totnes in 1951. He did a fair amount of agricultural building work for T Brooks and remembers putting corrugated asbestos roofs on agricultural buildings. The corrugated asbestos would have to be cut to size and he had to mitre the joints together. It was very dusty work and he wasn't provided with a mask or other protective equipment, or warned about the dangers of asbestos. He also recalls the asbestos sheeting arriving from buildings merchants, F J Reeves of Totnes on lorries without any packaging.

Exposure to asbestos at EBC & Sleeman of Exeter 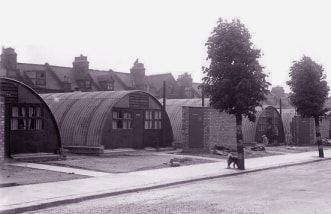 He then worked for a firm called EBC & Sleeman of Exeter.
He helped to demolish old buildings and to modernise other buildings. This entailed taking out a lot of walls, ceilings and much lagged pipework, so he was in contact with asbestos, often asbestolux, which he would have to saw to size and screw into place.

The asbestolux was used for wall panels, lining staircases, building and lining cupboards and pretty much anything where you would otherwise use a fibre board or wood for.

EBC & Sleeman employed subcontractors in to lag the pipe work with asbestos. He remembers seeing them mix up a powder and then applying it to the pipework, it was incredibly dusty.

Exposure to asbestos at Stavertons Construction

After he left this firm, he worked for Stavertons Construction who were taken over by J T Construction of Bristol. There he worked directly with asbestos. He helped to convert the workshops at the Newton Abbot railway station from steam to diesel. The workshops had roofs made out of corrugated asbestos and they were also full of asbestos lagged pipework.
To demolish the corrugated roofs, he got on top of the roofs and smashed them. There was also asbestos in the new buildings - asbestolux - which was again used to line walls and for partitioning, and also to box in girders, so he would often be cutting asbestolux boards to size. This job was extremely dirty and dusty and he was not given any mask or other protective equipment or any given warnings about the dangers of the asbestos.

The next job was demolishing old Nissan huts/barracks at Lymstone Marine Camp. All the services, heating, electrical etc was housed undergrounds in tunnel areas. There was a huge amount of pipework and he remembers following pipe-laggers as they cut reformed lagging to shape/size and then strapping it onto the pipework. He bedded in the concrete covers for the ducts.

Have you been diagnosed with mesothelioma after working as a Building Labourer?

If you were a building labourer in the 1950s and 1960s, you probably came in contact with asbestos. This case is fairly typical of the hundreds of cases we have taken where people have demolished old buildings that were riddled with asbestos. In a few cases, this asbestos exposure has lead to Mesothleioma.
For any further details or to make a claim for compensation following a diagnosis of Mesothelioma, please contact us by calling our freephone number 0800 923 0046 and ask for Kathy Cooke or Warren Miller.