William Press was best known for the conversion of many houses in the UK from town gas to natural gas in the 1970s.

In 1982, William Press merged with Fairclough & Son to form AMEC.

Exposure to asbestos at C.A. Parsons 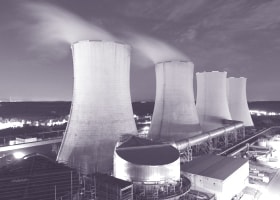 Mr R worked for C.A. Parsons at Ratcliffe Power Station and was involved in the construction of turbines and the installation of pipework. He said that it was filthy work and was extremely dusty. He worked with laggers from Darlington Insulation, who were about 20 yards away from him while he was doing this work.

There was little ventilation and he was not provided with a mask or any other protection. There were no warnings or training about coming into contact with asbestos. He used to wear old jeans, his own clothes.

” I was filthy at the end of each day. The dust and muck got everywhere, in my hair, up my nose and in my ears. The first thing I did when I got home was to have a good wash. ”

Exposure to asbestos at William Press

He did this job for over six months and in 1967 moved to William Press. This was a time when natural gas was being brought in from the North Sea and he was fabricating pipe work in gas stations for British Gas. He was then sent back to Ratcliffe Power Station for a few weeks working on the installation of pipework again. He was once more working near laggers from the specialist lagging company, Darlington Insulation.

” It was dusty and dirty work. William Press at least supplied overalls which were left on site and which were laundered probably once a week. I was not provided with any protection or instruction. At the end of each day I was filthy, the dust got everywhere.”

He worked on other jobs during that time for William Press including a job at Castle Donnington Power Station that year repairing boiler pipes. It was a really old power station with huge pipes and was extremely dusty and dirty.

” We had to work inside one of the boilers, cutting old pipes out and then installing new pipes. There was a firm of laggers that prepared the area, stripping the asbestos lagging off the sides of the boiler and replacing it while we were doing this work.”

What to do if you have been diagnosed with mesothelioma?

If you have been diagnosed with mesothelioma and have worked in a power station or similar environment, we will be able to offer advice on whether you are eligible to claim mesothelioma compensation. Contact our freephone number 0800 923 0046 and ask for one of our senior specialists, Kathy Cooke or Warren Miller.