Trollope & Colls specialised in civil engineering and pioneering work in reinforced concrete during World War I, when many of the UK railway bridges, viaducts and docks were built. Other projects (mostly in London) included Claridges Hotel, The Head Office of Lloyds Bank, Daily Express, Daily Mail, The Times, Daily Telegraph, Trywsfynnd Power Station and The New Stock Exchange.

Trafalgar House took over Trollope & Colls in 1968 but it retained a separate identity. The company changed hands again in 1996 when Kvaerner, The Norwegian shipbuilding and engineering group, acquired Trafalgar House Construction as part of a bid for Trafalgar House plc.

Exposure to asbestos at Trollope & Colls 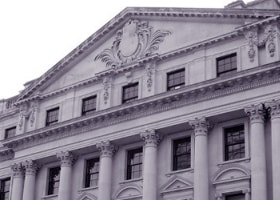 Mr E joined Trollope & Colls Limited in 1950 as an apprentice plumber. The apprenticeship was 5 years long and he worked on site in the West End and the City of London.

Projects included the Guildhall, Harrods, The Royal College of Surgeons, Associated Press in Fleet Street, The Dutch Church as well as various banks and office blocks.

As a young apprentice he had to do a lot of the fetching and carrying, sometimes working close to laggers.

” I remember them tipping 100 weight bags of asbestos into dustbins and mixing it with water. The dust went everywhere. The mixture was put on hot pipes and then covered in chicken wire. A further coat of lagging was then put on by the laggers. ”

Exposure to asbestos occurred at Liskeard School around 1974-76 when he had to remove an old boiler. The boiler room was in a semi basement, and was around 20 feet square. He had to take apart the sectional boiler which was lagged with asbestos. The lagging had to be hacked off with a hammer, chisel and bare hands.

” There was dust and muck everywhere. You were walking through it all the time. We had to bag up all the lagging ourselves. This meant sweeping it up and putting it into bin liner type bags. It was filthy work. We did this day in, day out, 8 hours a day for at least 2 weeks. We even had our lunch and tea breaks in the boiler room. The job was done in the school holidays so it was hot and sticky. We were not provided with any breathing protection. We were given no warnings or instructions about working with asbestos. ”

Have you been diagnosed with mesothelioma?

If you or a close family member have worked with asbestos at Trollope & Colls or a similar company and have been diagnosed with mesothelioma, we may be able to help. There is no limit to the number of companies that you can claim Mesothelioma Compensation from, we will be able to help even if many of the companies have ceased to trade.
Contact our freephone number 0800 923 0046 and ask for Kathy Cooke or Warren Miller.