London Country Bus Services was a bus company that operated in South East England from 1969 until it split up and sold in 1986. It formed part of the National Bus Company, which operated provincial services across the country. During this period many of the brakes were lined with asbestos and though Mr P did not work repairing brakes, he was certainly exposed to asbestos there.

Asbestos Exposure at The South of England Electricity Board (SEEB)

Prior to working for the bus company, he worked for the South of England Electricity Board (SEEB) as a jointer’s mate. He used to strip down cables which carried 11,000 volts, preparing them for the jointer. 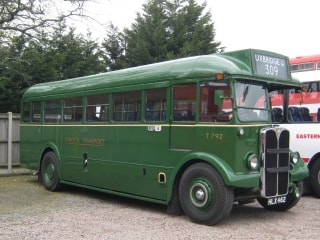 There was asbestos in the sheets which surrounded the cables he laid on local housing estates and also on the insulation of electrical substations.

He left in 1970 and went to work for the local authority of Reigate and Banstead painting the outside of houses including soffits and porches which were made of asbestos including gutters and drains. On most occasions, he had to rub down the asbestos fittings to make them smooth.

He would be working from the top of a ladder and the gutters and soffits were overhead so when they were rubbed down, asbestos fibres would fall on his head.

He was then employed by London & Country Buses as a hand painter where he was exposed to asbestos on a regular basis. During the process of warming up the buses, he recalls oil dripping from the engines onto the floor. The practice at that time was to take a bag of cast asbestos which had been obtained from the old brake shoes. The asbestos was used to soak up the oil on the floor and to get to the workshop he would walk through the garage where the loose and broken asbestos was sprinkled on the floors.

At some point during the 21 years he worked at London & Country Buses, they stopped using asbestos and started using sawdust. He also recalls that the garages roofs in London & Country Buses were made of asbestos and occasionally they would have to be repaired and maintained. He was usually in the building when this work was carried out and because the dangers of asbestos were not well known at the time, there was no protection provided from the asbestos dust that fell from the roofs.

Mesothelioma after working for a bus company?

You may have been exposed to asbestos while working at a bus company, especially if you worked in maintenance and fixed the brakes. If, as a result of this exposure, you have been diagnosed with mesothelioma, we can offer advice on how to seek compensation. Contact us by calling our freephone number: 0800 923 0046 and ask for Kathy Cooke or Warren Miller.