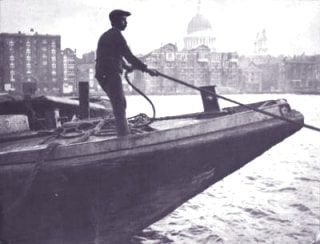 Watermen and Lightermen worked on the Thames on flat-bottomed barges called Lighters, transferring goods between ships and quays.

The Ships would moor in the middle of the Thames and transfer goods, including asbestos onboard the Lighters.

They also transferred goods up and down the Thames from the riverside factories to the quays and vice-versa. They tended to work alongside Dock Workers and Stevedores, who were responsible for loading and unloading the ships.

Most Lightermen were surplus to requirements after the closure of most of London's docks in the 1960s. This was due to technological and economic changes, particularly the introduction of containers. However, a few Watermen and Lightermen did remain in work.

This case was taken on by our mesothelioma solicitors after it had been rejected by 2 other firms of solicitors on the grounds of lack of evidence.

Mr R started his 7 year apprentice in the early 1950s when he was just 15 years old. The length of time is necessary to gain an intimate knowledge of the river's currents and tides.

In order to establish specific exposure to asbestos, our solicitors were able to trace witnesses who worked as Stevedores and dock workers at the time.

Mr R had to personally supervise the loading and unloading of goods to and from his Lighter. This was for his records and to ensure an even distribution of the goods. The witnesses remembered unloading asbestos bags from the ships onto his Lighter and were key to the success of the claim.

If you were exposed to asbestos in a similar fashion - as a Lighterman, Stevedore or Dock Worker - we can help you to claim compensation. Some Mesothelioma claims are more complicated than others - as in this case. Our Solicitors often take on cases that have been rejected by other firms. They will always go the extra mile to fight for the rights of victims of Mesothelioma.