History of Harland and Wolff in Belfast

Shipbuilding in Belfast dates back as early as the 17th century. In the 18th century a Scottish shipbuilder - William Ritchie - realised the potential of the new quays and built his first ship The Hibernian. His arrival in Belfast was the start of what would become perhaps the most famous shipyard in the world. 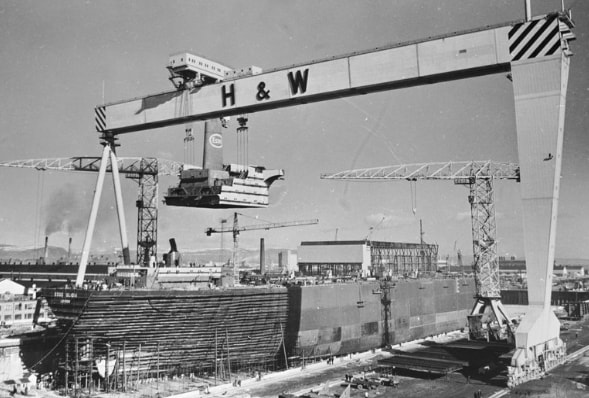 Edward Harland was born in Scarborough in 1831. He was an apprentice with Robert Stephenson & Co then moved to the Hickson shipyard in Belfast.

Edward Harland had bought the yard in 1858. Gustav Wolff had been employed as a personal assistant by Hickson. Harland quickly made him a partner in the new firm, and Harland and Wolff was officially formed in 1861.

By the early 1900s, Harland and Wolff employed thousands of men in a shipyard covering some 300 acres. Jobs there included welders, riveters, platers, plumbers, painters, carpenters, designers and naval architects.

When work began on the three liners commissioned by the White Star Line, the company employed 15,000 people. More than 4,000 of them worked on the construction of the first two of these liners, Olympic and Titanic.

By 2013 more than 2,000 people have claimed against Harland and Wolff for asbestos related illnesses including Mesothelioma. An estimated £150 million had been paid out by this time.

Mr P was 72 when he was diagnosed with mesothelioma in 2015. He had worked as a shipbuilder for Harland and Wolff in Belfast in the 1950’s and 60’s, and then went into the Merchant Navy. As a shipbuilder he would have been exposed to asbestos as many old boilers had an asbestos ring around them, that had to be pulled off causing asbestos dust to be released.

Mr P instructed our lead solicitor, Helen Childs in April 2015 and his previous employers were contacted immediately. The insurers for Harland and Wolff admitted responsibility for his illness and paid £50,000 on account within 3 months.

After gathering together medical evidence and financial information we issued court proceedings to ensure a speedy settlement of his claim. The case settled for just under £200K within just 9 months, giving Mr P the peace of mind of knowing his wife and family will be well provided for.

If you worked for Harland and Wolff or a similar shipbuilding company in the 1950s - 1970s, you were almost certainly exposed to asbestos. If you now have an asbestos related disease as a result of that exposure, we at Royds Withy King can help you with a compensation claim.

Over the years, we have successfully settled hundreds of similar cases, so even if you would just like some advice, we are here to help. Call us on the number below and ask for Warren Miller or Kathy Cooke.