Mr T was unable to provide many details as to where and when he was exposed to asbestos as he was in the advanced stages of Mesothelioma at the time the witness statement was taken. 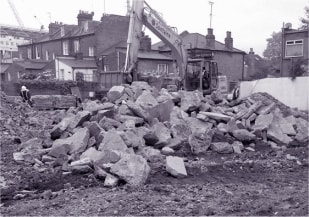 He mentioned that he worked on an estate in Cheshunt where he carried out demolition and construction work.

Unfortunately he died from mesothelioma shortly after the statement was taken and though his widow provided some information, she was not aware that he was in contact with asbestos.

Many firms of solicitors would have given up at this point, but our solicitors waited for the Schedule of Employment from HMRC to investigate further.

They found that he was employed as plant driver and digger by The London Borough of Haringey when he worked at the Russels Ride Estate in Cheshunt.

The next stage of the investigation was to ascertain what materials were used in the construction of the Estate. At that point it was apparent that asbestos was widely used.

They also looked at the structure of the buildings that were demolished prior to the construction phase of the estate. Witness statements were obtained that stated that the whole area of Cheshunt and the Lee Valley was full of commercial glass houses.
This included a statement from a digger driver who worked on the development at the same time as the claimant.

Our mesothelioma solicitors obtained films and photographs to enforce the witness statements that the glass houses contained asbestos. The demolition of these glass houses would also certainly have released asbestos into the atmosphere which would have been breathed in by the digger drivers.

The Haringey digger driver also stated that the rubble from the buildings - including asbestos - was used as hardcore in the foundations of the new buildings.

All of this evidence meant that Mr T probably had significant exposure to asbestos at his time at the London Borough of Haringey as a digger driver. This led to developing mesothelioma later in life.

If you, or a close relative have been exposed to asbestos while demolishing buildings, we will be able to help you to get the compensation you deserve, especially if you have been diagnosed with mesothelioma as a result of this exposure.