Mr T worked as a Customs and Excise official. During the 1960's he was employed in rummage crews whose main task was to search ships for contraband. These duties involved indepth searches of ships' engine rooms and store rooms and after these searches he returned home, completely covered in asbestos dust and particles of asbestos fibre.
Many ships relied heavily on the heat resistant properties of asbestos to line pipes and boilers especially in the 1950s and 60s. 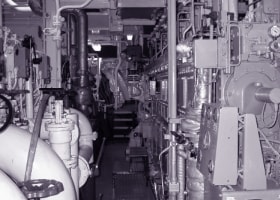 Our solicitors were able to recover over £170,000 in compensation for Mr T shortly after he was diagnosed with mesothelioma.

The was done with the assistance of a witness statement from someone who worked with Mr T from 1959 to 1964 at North Shields Waterguard. They were both Assistant Preventive Officers (APOs).

As APOs they had many types of duty, but one was to work as part of a Rummage Crew. This entailed searching ships, including the engine room, for contraband goods.

The witness remembered there was always a lot of asbestos in the engine rooms, lagging on the boilers and on the water and steam pipes and in the ventilation shafts.

They often had to search older ships and noticed that the lagging tended to flake when searching behind pipes, this was when the asbestos was disturbed. The nature of the work, looking for contraband goods, was to look behind things in the engine room, and in the ventilation shafts, so there was always a chance that they would be disturbing the asbestos.

The nature of the work was to search in places that were not obvious to the naked eye, and so they always got dusty and dirty.

” I remember looking in a ventilation shaft, and seeing a very fine dust just suspended in the air. I always assumed it was asbestos dust. I remember thinking I could not see any goods in there, and not wanting to disturb the dust further, I replaced the panel. ”

Recently diagnosed with mesothelioma after working for HM Customs?

In the 1950s and 1960s many ships were riddled with asbestos and many thousands of people were regularly exposed to asbestos. These included workers who fitted and maintained the ships, employees who sailed the seas for the Royal Navy, Merchant Navy and Cargo ships, workers who loaded and unloaded ships. Also, in rarer cases, rummage crews who worked for HM Customs & Excise.

If you or a close family member were exposed to asbestos in a similar way and have recently been diagnosed, we can offer advice on how to seek mesothelioma compensation.