Charing Cross Hospital is an old Victorian hospital. In the 1960s, when you entered the hospital there was a large central atrium at ground level and departments and wards led off from the atrium. There were approximately 16 to 18 departments. Each of the wards at Charing Cross had a similar layout, a sister’s office at one end and then a separate kitchen and sterilising room. Along the wards there were 16 beds on each side and in the centre of the ward there was a desk which the nurses would use. At the far end of the ward there was a bathroom and sluice room where bedpans and urinal bottles would be cleaned.

Mrs O started training as a nurse in 1963 and completed the training in 1967, at the old Charing Cross Hospital. 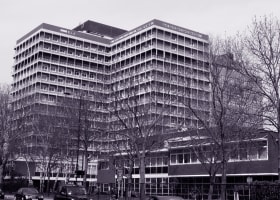 The beds in the wards were made of metal and would be pushed against the wall. Running along the wall were heating pipes which were lagged with asbestos.

She remembers that when moving the beds we would often bang into the pipes as they would make a loud clanging noise. This banging is likely to have disturbed asbestos dust as it crumbled from the insulation covering the pipes.

The nursing sisters were always strict and would make sure that the nurses were always busy. If they were not looking after patients then they would be cleaning the wards. This would include wiping down the heating pipes and brushing up dust or debris.

Have you been exposed to asbestos at Charing Cross Hospital?

Many old hospitals had pipes and boilers that were lined with asbestos. It is rare to develop an asbestos disease without significant exposure to the dust. However, mesothelioma can develop from relatively small amounts of exposure, as in this case. If you worked at Charing Cross Hospital from the 1950s to the 1970s, you may have come into contact with asbestos. Buildings on the original site were expanded several times and asbestos would have been removed from pipe work, ceilings etc.

If you or a family member has been diagnosed with mesothelioma following similar exposure, we can help you to claim compensation. Contact us by calling our freephone number: 0800 923 0046 and ask for Warren Miller or Kathy Cooke