Mr A was exposed to asbestos at Birmingham University in the building trade in the 1950s and 60s. He worked for various different companies on different jobs there and believes he was in contact with asbestos on some of them.

One of the jobs was for Turrifs Construction Corporation Limited, working in the labyrinth of tunnels underneath the university fitting skirting boards. There were massive pipes and monstrous boilers in the tunnels and he fitted the skirting boards very close to them. The pipework and boilers were lagged with asbestos and he probably came into contact with asbestos dust as a result of working down there on that particular job. There was no ventilation in the tunnel, so the conditions were pretty poor. 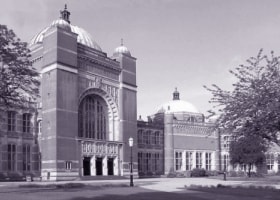 He then worked for Hamers, of Tottenham Court Road, London (He believes this company was in some way connected with Brasted Brothers Limited)

This job was fitting a new laboratory, which included fitting benches and cupboards as well as refitting the lab.

He remembers working on fume cupboards, which were used to experiment with heat and therefore needed to be fire proof, so the panels had an asbestos lined back.

To cut the panels, he had to to drill the four corners of the panel before inserting the jig saw blade into one of the holes and cutting along the edge of the panel.

He had to blow the dust so that he could see what he was doing, so the asbestos dust was constantly flying up into his face. There was no respiratory protection and the only protective clothing he was given was an apron so his clothes would get dusty, as would his hands as he was not provided with gloves.

He would take lunch breaks on site and wouldn’t wash his hands, so continued to be exposed to the dust, from his hands and clothing and from the environment in which he continued to be in. When he returned home he recalls shaking his apron stirring the asbestos dust up even more.

”I believe that I had heavy and intense exposure to asbestos during this particular job as there was no getting away from the asbestos dust which floated and hung in the atmosphere. We had no choice but to breathe it in, oblivious of course to the dangers.”

While working at Birmingham University he also recalls working alongside laggers who mixed asbestos in a bath sized container, which they would then add water to before mixing the substance and applying it to the pipes. He believes that this will have contributed to his exposure to asbestos as he sometimes worked in the vicinity of others who worked with asbestos, even when he wasn’t working with it himself.

Mesothelioma after working at a University

If you worked in construction or maintenance at a university from the 1950s - 1970s, there is a chance that you may have been exposed to asbestos. Workers at risk would include anyone who worked with pipes and boilers which were often lagged with asbestos. The chance of developing Mesothelioma from such exposure is very remote, but if this is the case, we may be able to offer some advice on the options available to you.