Mr J started work for Associated Octel Co Ltd in Ellesmere Port, Cheshire in the early 1950s. The company was owned by Shell, BP, Esso and several other companies. The company was initially called Associated Ethyl Co Ltd and was set up to produce anti-knock compound for petrol during the war. It later changed its name to Associated Octel Co Ltd, and became separated from the original parent company. In the early 1950’s, the full size chemical plant was built at Ellesmere Port in Cheshire and Mr J was employed there as an Assistant Process Manager. 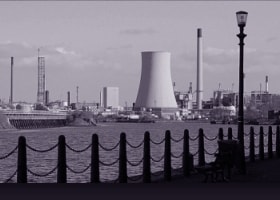 Associated Octel Co Ltd employed its own maintenance team. When there was a problem, the maintenance team had to remove all of the asbestos lagging on the pipes and vessels in order to gain access to remedy the problem. Removing the asbestos gave rise to a huge amount of asbestos dust and fibres, which were released into the atmosphere.

This ready formed asbestos was then applied to the pipe work or vessels, finished off by applying what looked like asbestos mud. This was made from bags of raw asbestos which was poured into a bucket or drum, and mixed with water to form a paste, which caused asbestos dust and fibres to be released into the atmosphere.

Once the maintenance team had completed their work, they had to clear up after themselves because the plant had to be clean. They would therefore sweep up all of the debris and asbestos dust and fibres using a dry brush and shovel. This of course further disturbed the asbestos dust and fibres which had settled and released it back into the atmosphere.

Mr J never worked directly with asbestos. However, he worked for Associated Octel Co Ltd for 4 years, and saw the maintenance team remove asbestos and re-lag pipe work and vessels on and off throughout that time. Given the nature of the job, employees were provided with appropriate personal protective equipment to protect the skin from the chemicals. However, they were never provided with a mask or any other form of protection from the contents of the air. As a result, there was no protection from the asbestos dust and fibres which were released into the air by the maintenance team.

” Sadly, the dangers of asbestos were not taken into account and we were not adequately protected against this on a daily basis. It was only if chemicals had been accidentally released that we were provided with full protection. We were never informed of the dangers of being exposed to asbestos dust and fibres. ”

Have you worked with asbestos at Associated Octel?

If you have worked at a large chemical plant up to the 1970s, you may have been exposed to asbestos. Due to the heat resistant properties of asbestos, it was used extensively to line pipes and ovens used in the manufacture of chemicals. If this exposure has lead to an asbestos disease including mesothelioma, we can offer advice on how to seek compensation.
Contact us by calling our freephone number: 0800 923 0046 and ask for Warren Miller or Kathy Cooke.