Mr R. worked as electrician for a company called Sound Diffusion in Brighton from the mid 1960s. He mostly installed fire alarm systems which were produced by Sound Diffusion, and they would supply the alarms and all fittings. Sound Diffusions allocated the jobs after having inspected the premises and given successful quotes for the work. 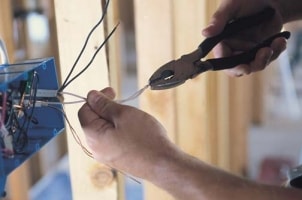 One of the jobs he did was at Liberty’s of London, putting a fire alarm in their flag-ship store on Regent Street. He worked there for about 18 months. He recalls that there was a lot of asbestos lagged pipework in Liberty’s basement area, which housed the heating and ventilations systems.

There were long lengths of asbestos lagged pipework and as we installed the fire alarm systems, they often disturbed the pipework, causing asbestos dust and fibres to fly off into the atmosphere.

18 months after he had put the fire alarm in, he went back to do some further work, and Liberty’s had a specialist company in to remove the asbestos from the basement. Neither Liberty’s or Sound Diffusion gave any warnings about the presence of asbestos or provided us with masks or any other protective equipment.

He also installed the fire alarm system at the Grand Hotel in Brighton, working in the basement area. There was lots of lagged pipework, which he couldn’t help but disturb during the course of the installation work. Again he did not have any masks or protective equipment and did not know that what he was disturbing was asbestos.

He also worked at mental hospitals in the London area, including Darrant Park at Dartford. Again he worked in the basement area with lots of asbestos lagged pipework, which was disturbed during the course of the installation of the fire alarm.

He also installed a fire alarm at the Tate & Lyle Refinery Factory on the Thames, where there was an enormous amount of asbestos lagged pipework, and again he couldn’t avoid disturbing it during the course of the work. He also worked in numerous shops, factories and most of the hotels in Bayswater. On every occasion he was not provided with any protective equipment.

Have you worked as an Electrician and been diagnosed with Asbestosis?

If you worked as an electrician in 1950s, 60s or 70s, you may have been in contact with asbestos. Especially if you disturbed asbestos lagged pipework as in this case. You may have worked alongside laggers, or drilled into asbestos, or been exposed to asbestos in a variety of other ways. If you have been recently diagnosed with an asbestos related disease as a result of that exposure, we can help you to claim compensation.

Our asbestos solicitors have brought numerous claims against firms of electricians and have recovered millions in compensation.
For more details on whether you can make a claim, contact us on the free-phone number below and ask for Warren Miller or Kathy Cooke.