Mr B received payment for Asbestosis Compensation of £22,500

Mr B started work in Avon Mouth Docks In 1947 as a casual labourer. At that time, the National Dock Labour Board operated a system which placed workmen with particular companies. This was called the pen system. If you were not selected by the system, the National Dock Labour Board paid £4-8 shillings a week and you signed on with them if you were not picked.

He worked in the pen system for about 7 years, mostly as a stevedore unloading cargos. He remembers unloading cargos of asbestos which came from South Africa and Canada. He had to go into the holds of the vessels and load the cargos so that they could be hoisted out of the hold. There would be 16 or 20 bags at a time being lifted out, the bags of asbestos were light but extremely dusty. Every time they moved puffs of dust came out of them and there was no ventilation in the hold so it was extremely dusty work. 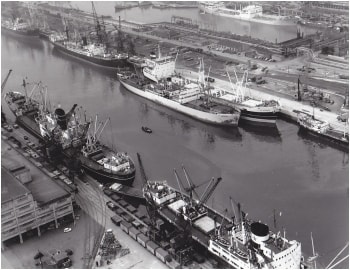 The asbestos cargos would take a week or 10 days to unload, depending on the ships size, they probably moved 150 to 200 tonnes a day.

During this time as a casual worker he was allocated to different companies, including Reed Stock & Company Limited, and The Port of Bristol Authority.

The work for the Port of Bristol Authority was on the shore receiving the cargo as opposed to unloading them direct in the holds of vessels. The cargos were still extremely dusty but at least the work was outside.

There were other companies on the docks that undertook maintenance work in the engine rooms and boiler rooms of vessels. He did some small jobs for them and was present when their laggers mixed lagging when they were repairing pipework on the vessels.

” I was filthy at the end of each day. The dust from unloading the asbestos cargos got everywhere. It was in my hair, up my nose, in my ears and in my hair. The first thing I did when I got home was to have a bath. I was not given any warnings about coming into contact with asbestos. I was not given any protection. I wore my own, old clothes. ”

Mr B started working permanently with Reed Stock and Co Limited in about 1964. It was the same work as before, working as a stevedore unloading cargos. Again, some of the cargos were asbestos and again he worked on them for 7 days to 10 days at a time depending on the size of the vessels. It was extremely dusty and dirty work. The asbestos was flaky powdery stuff but light to handle and there was dust everywhere. Sometimes the bags got ripped because hooks were used for loading.

” The asbestos cargos could come every month or less frequently. I was given no warnings or information about the dangers of working with asbestos. At some point during my time there I was provided with a tin mask. I cannot remember now exactly when that was. It had a filter in it and covered my mouth. It was not much use, though. It was hot and sticky working in the hold and you had a job to breathe. I wore it as long as I could but took it off after a while. ”

Dock Workers can now claim from the Government

Dock workers with asbestos-related illness have been granted the right to sue the government following a Judgment by the Court of Appeal.The case involved a former dockyard worker Robert Thompson 65 and Winifred Rice, the widow of a dockyard worker. They failed in their original action last year at the High Court.

It rules that the government could not be held responsible, but that instead the Department of Trade and Industry was responsible for the dockers safety.The overturned ruling now means that dockers can be compensated by the government. Previously many of those seeking compensation endured long searches for Dock Labout Boards many of which no longer exist.

Claiming compensation if exposed to asbestos as a Dock Worker

From the 1950s to the 1970s many ships carried asbestos to these shores from asbestos mines in South Africa and Canada. During this period, companies were unaware of the dangers of asbestos and ships were unloaded by dock workers who were not provided with any protection.

If you have been diagnosed with asbestosis or another asbestos related disease within the last 3 years as a result of expoure to asbestos on The Docks, you may to able to make a claim for compensation.

Contact us on the number below or fill in the online claim form and we will call you back.